1) The VA signed a $34.5 million deal for N95 masks with a company that advertised “block chain” solutions and had only existed for 2 years. I called the company to see why Ended up on a private jet, following one of the most bizarre stories of my career …

2) The CEO, Robert Stewart, had ZERO experience getting medical supplies. But he told me he had found 6 million N95 masks. He was flying to Chicago on a private jet to see them delivered. I asked to tag along.

3) Here we are getting on this Legacy 450 FlexJet the next morning. His company paid more than $22,000 for this trip, according to receipts he shared. (ProPublica reimbursed FGE for the cost of a commercial ticket.) 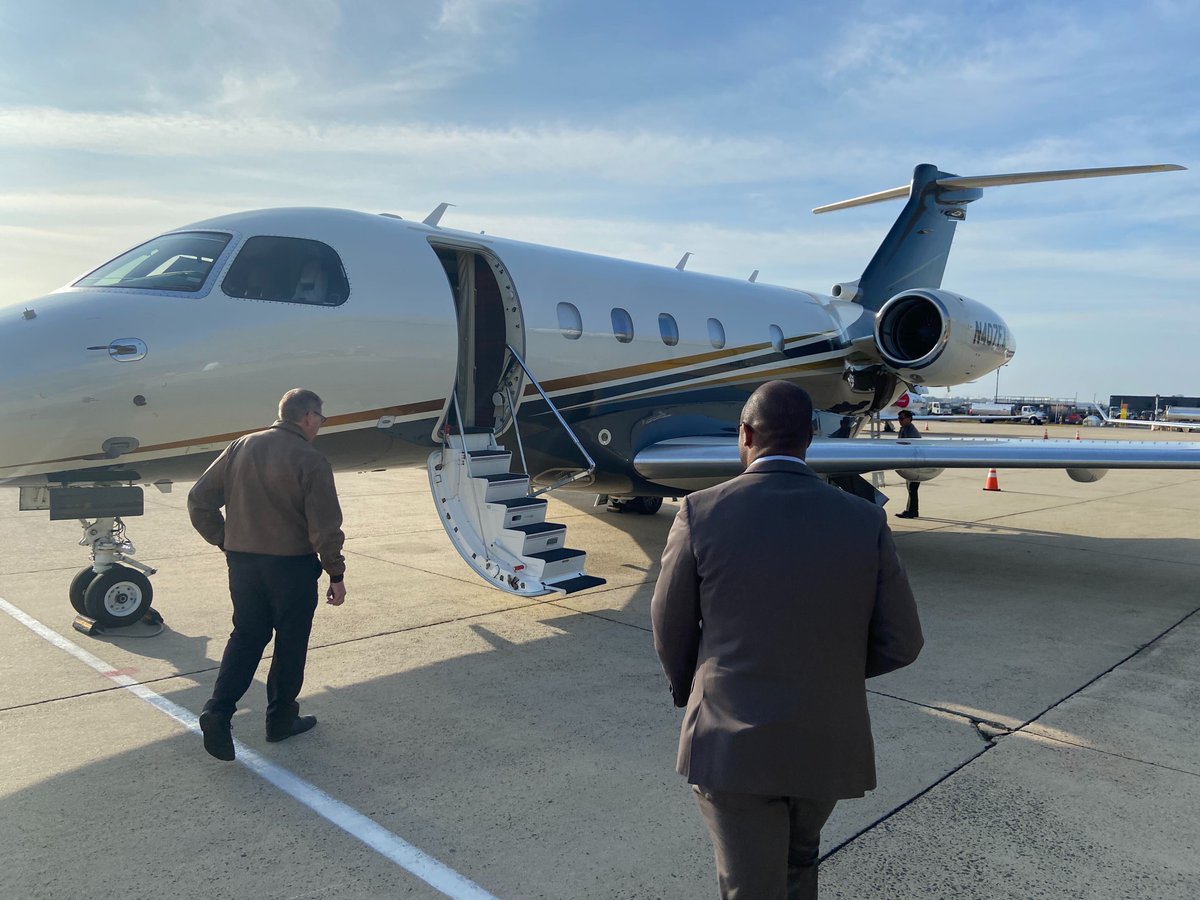 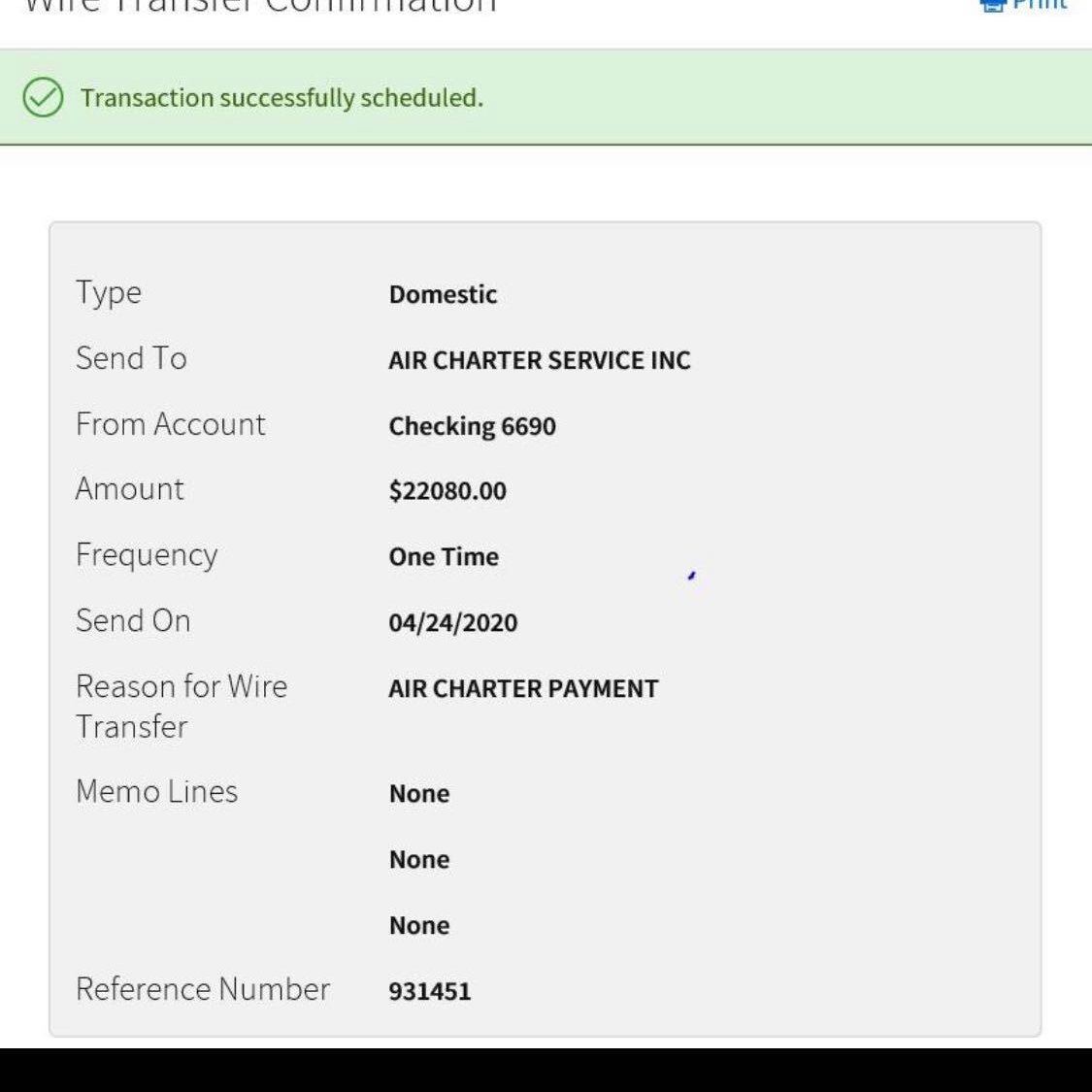 4) “I’m talking with you against the advice of my attorney,” he said. His lawyer was supposed to come but slept in and wasn’t answering. I confessed a small fear. It was my 1st time on a jet. “My first time, too,” he said. After liftoff, the story took a strange turn.

5) Stewart revealed that the 6 million masks that were supposed to be shipped to Chicago had been sold to another buyer when he didn’t produce the money fast enough. So, he had no masks. 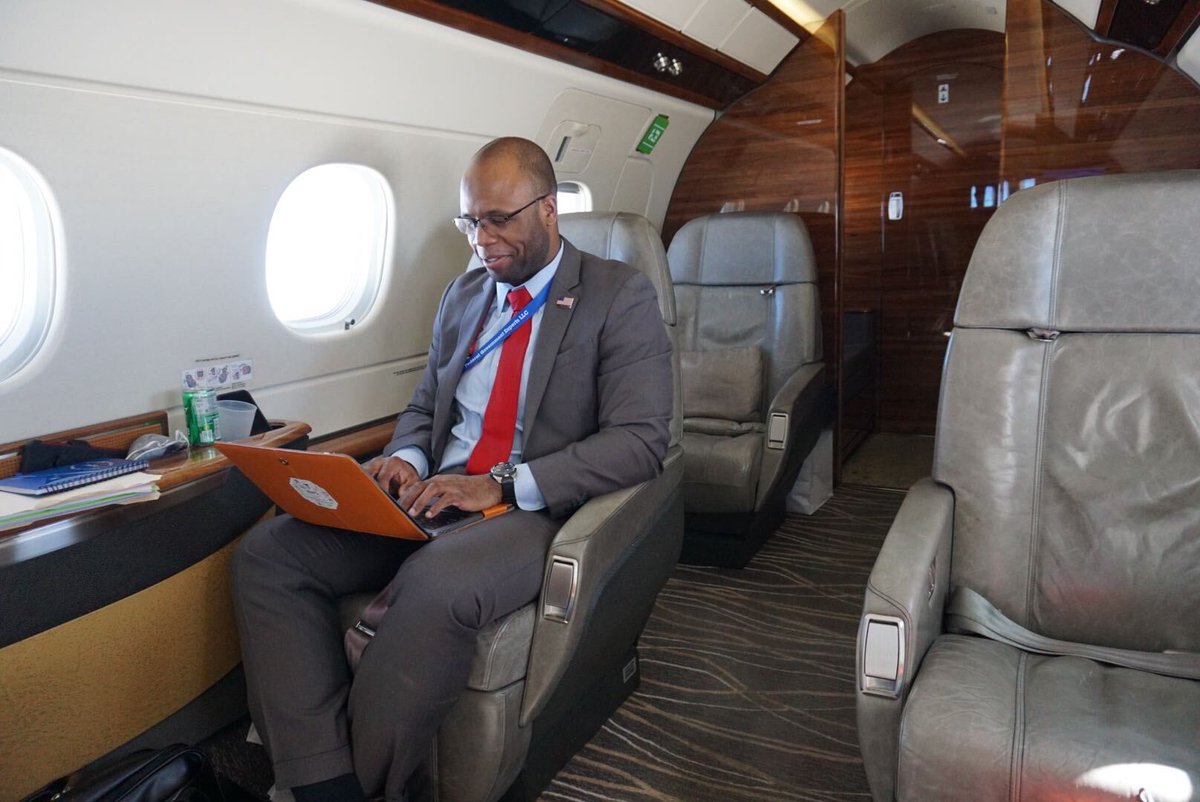 6) Why on earth were we flying to Chicago — stopping first in Georgia to pick up his parents — when he didn't actually have any masks? “It was kind of a faith thing,” he said.

7) According to the deal he had signed with the VA, he had to deliver 6 million N95 masks by midnight that day. So, he had been frantically working the phones, talking to brokers and middlemen. Here’s what happens next...

8) Just hours before we first talked on the phone, Stewart said he got connected to a broker - someone with a connection to 3M, a major mask maker in the U.S. This fixer wasn’t just anybody...

9) Troy King was the former attorney general of Alabama. He’d just lost a run for Congress. Some background on King:

10) Stewart said King connected him to an unidentified distributor, who could then connect him with 3M. Then the story got even weirder...

11) Stewart claimed he had a contact within the White House Coronavirus Task Force, who was working to help him smooth the new deal over with the VA. But spokespeople with the task force and the VA had never heard that “contact’s” name, and there were no employment records...

12) Then he told me King was actually the one with the contact. King did not respond to a question about that.

13) Much of what Stewart told me either proved false or impossible to confirm, which he says is because he was being lied to by brokers and middlemen, who he later referred to as “buccaneers and pirates.” 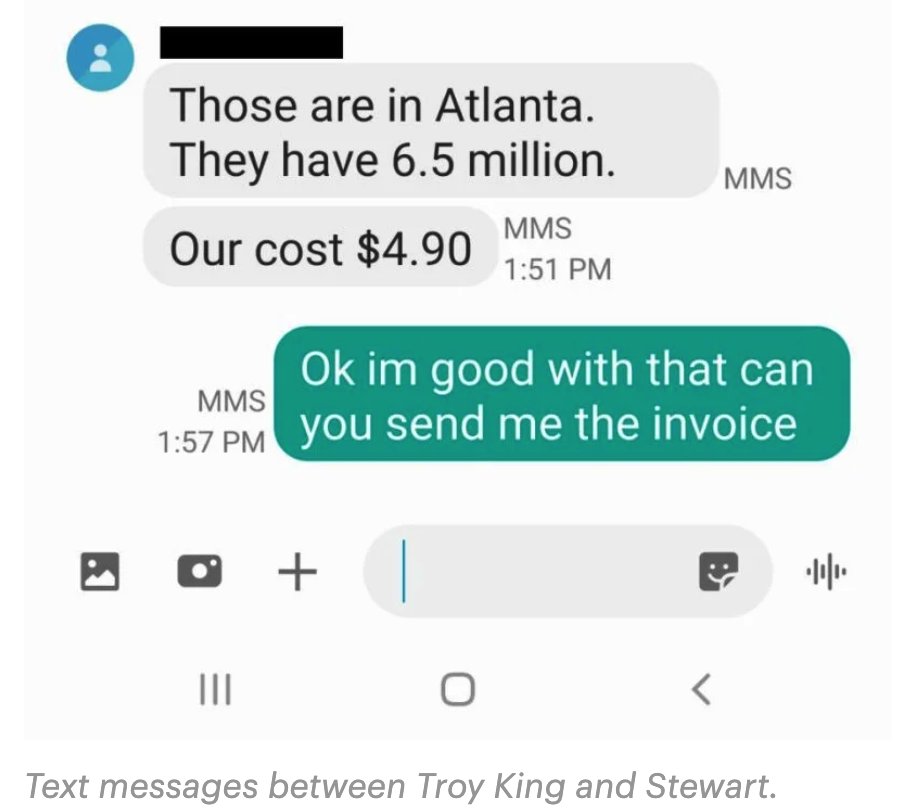 15) King also sent Stewart a “POL.” That stands for Proof of Life, which suppliers often demand to prove that something they’re shipping exists. But the short cellphone video showed what appears to be hundreds of 3M boxes. That didn’t prove much - WHAT’S IN THE BOX?

16) Once we landed in Chicago, Stewart said we’d drop his folks off at a hotel and then take a taxi over to the VA distribution center and wait for a mask delivery “even if we have to wait until 3 a.m.” We never left the vast and vacant Hilton.

17) In the lobby, Stewart worked the phones. He needed the VA to sign off on his new arrangement, but to win approval, he needed invoices and other documentation that he said King wasn’t sending over. 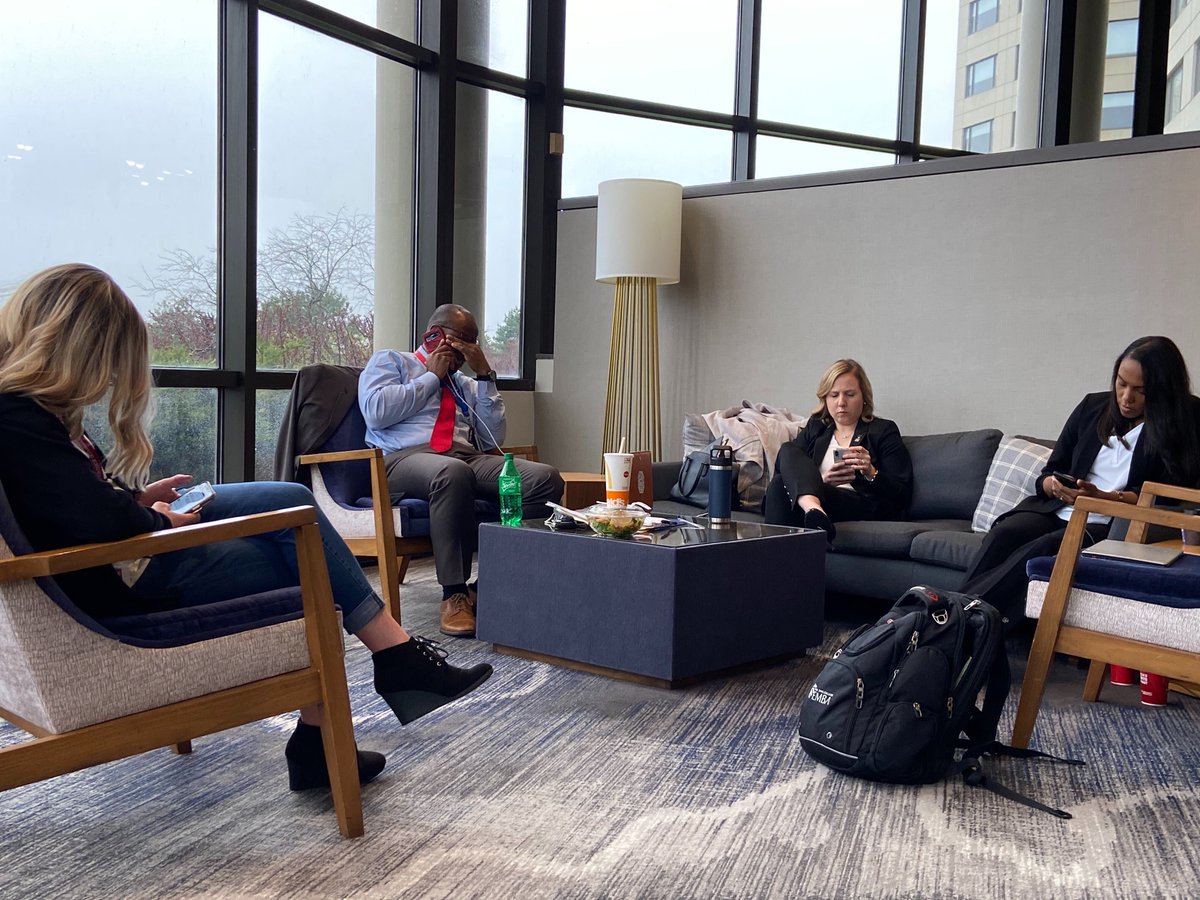 18) I sat there for hours as Stewart and his associates - most of them longtime friends - called trucking companies, people who had access to cargo jets and so on. But … he still hadn’t purchased any masks. No masks, no way to ship them.

19) King says they had never signed any agreement or deal. “After several conversations over the weekend, Mr. Stewart informed us that he had secured these masks through another source and that he would not need our services to secure the masks,” King said through a spokesperson.

20) Then, a new idea emerged. Maybe they could get the VA to agree to an extension? Stewart’s friend, Roosevelt “Trey” Daniels, had worked as a district director for U.S. Rep. Sheila Jackson Lee, a Texas Democrat, and got her office to draft a letter in support of FGE. 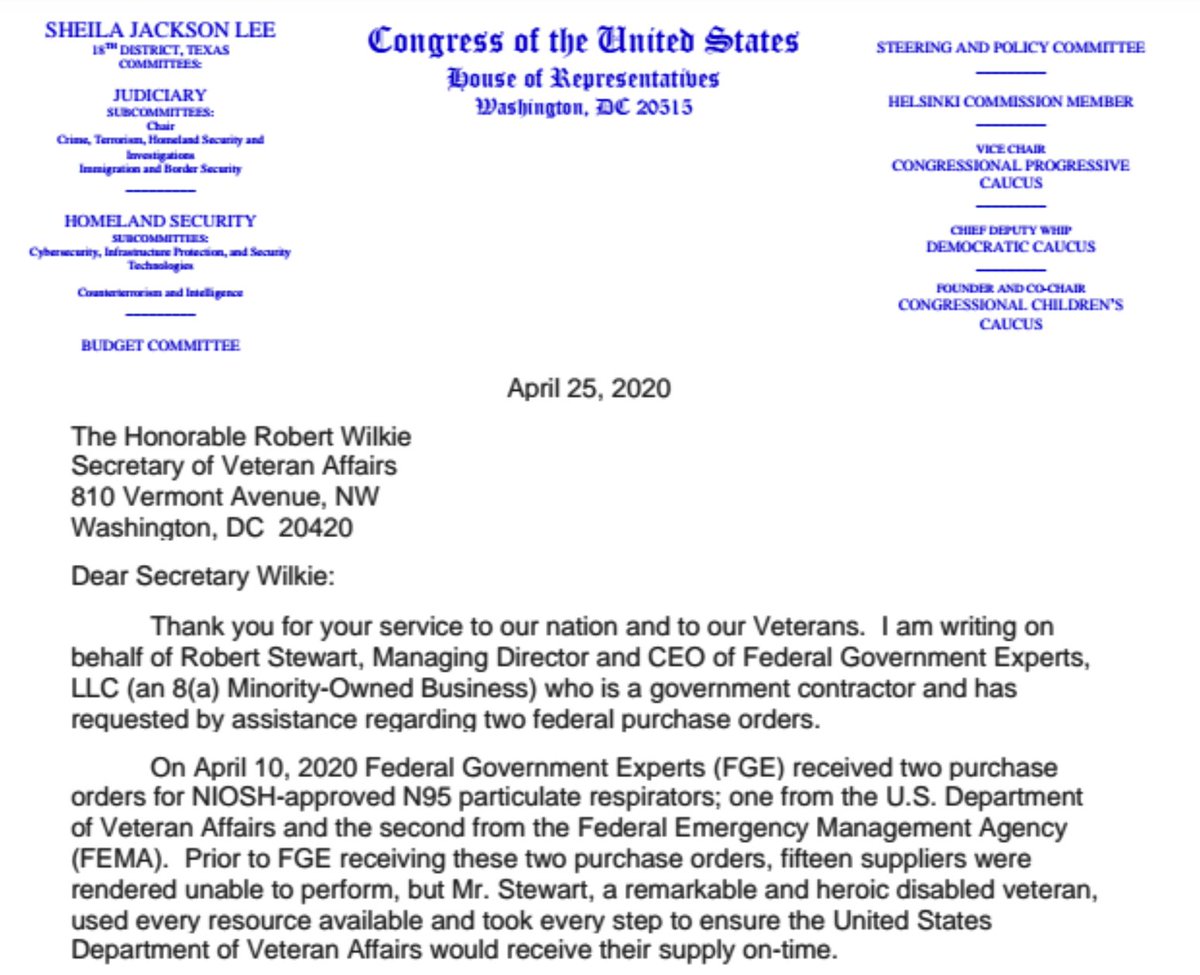 22) Stewart drafted a formal extension request, citing provisions in federal law. But as it grew late, the group came to accept that they had no masks, that they wouldn’t meet the deadline. At one point, Stewart turned to his mom and said: “Sorry we came up here for nothing.” 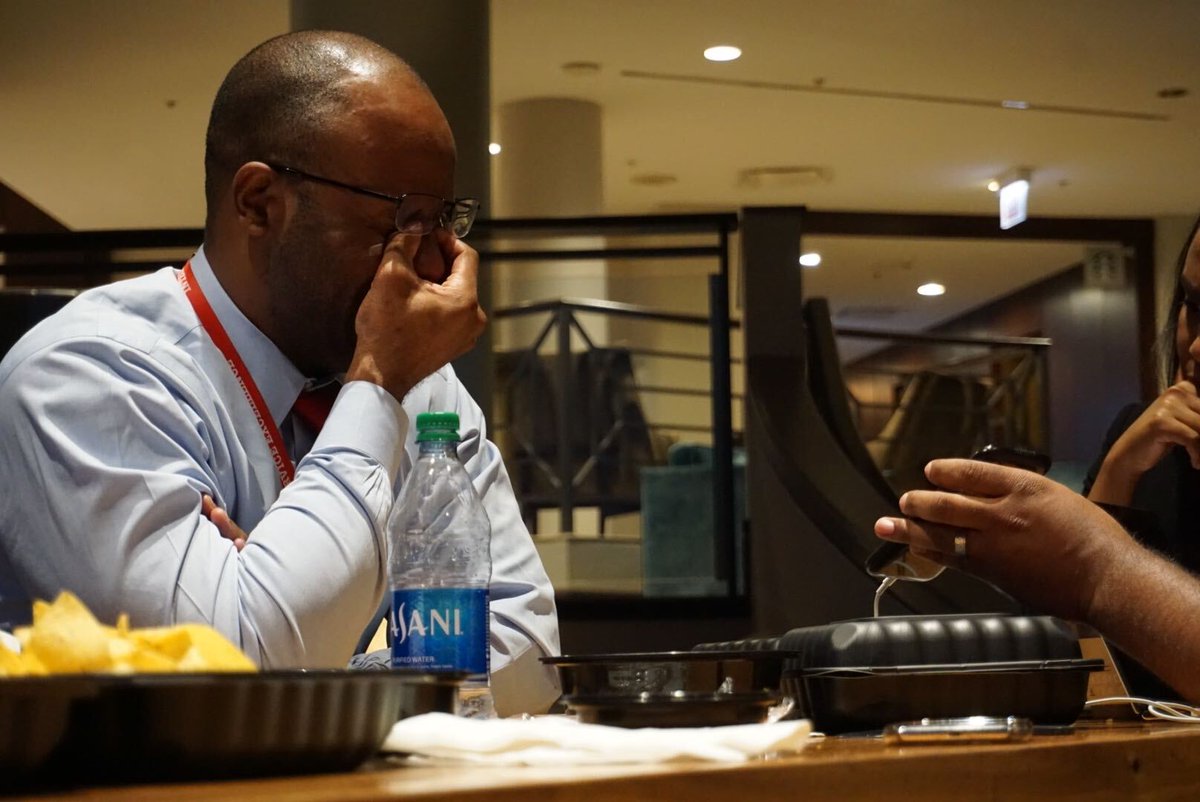 23) The next morning, as the dejected party boarded for a return flight, the pilot asked: “Anything I can get you before we take off?” “Six million N95 masks,” Stewart quipped. 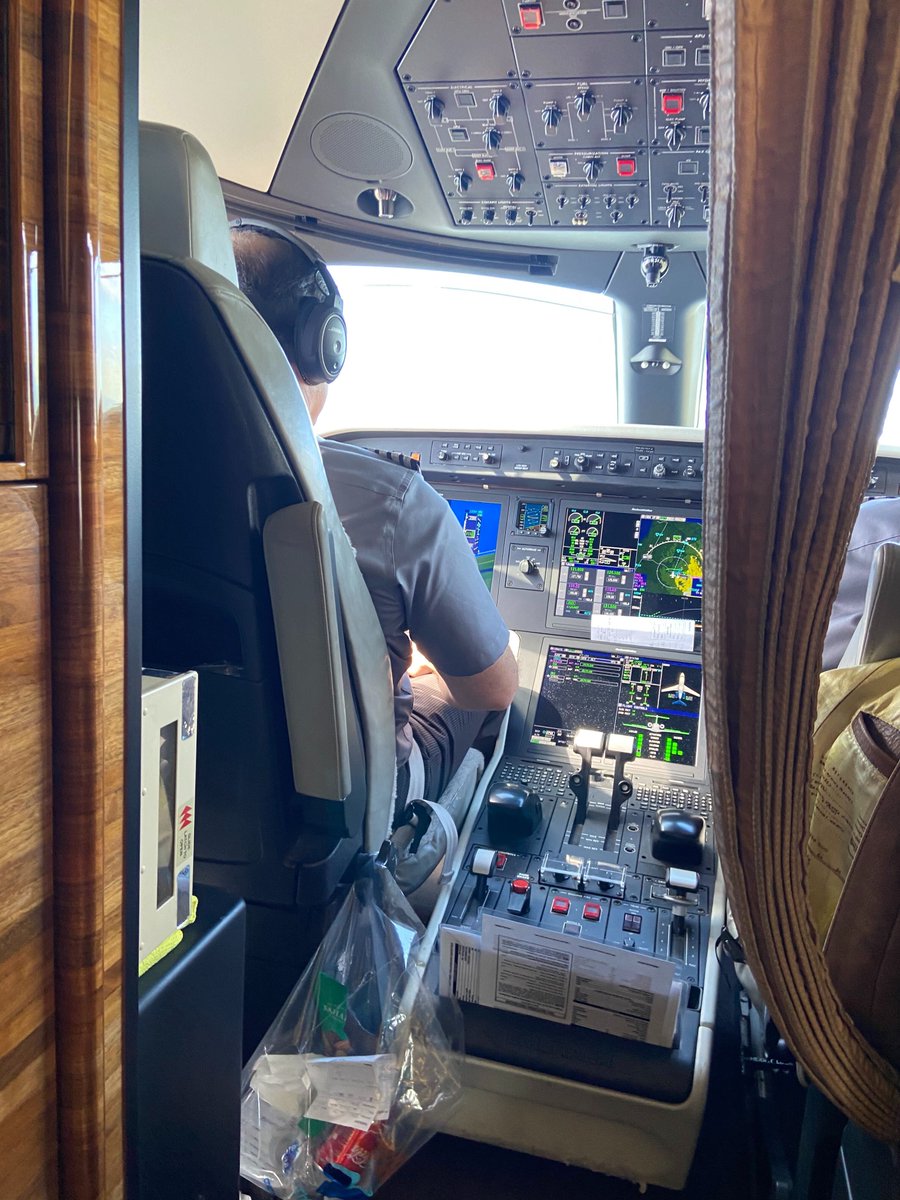 24) I still don’t know why Stewart let me observe his company’s frantic effort to find 6 million N95 respirators. I do know that 20 VA staff have died of COVID-19 while the agency continues to face a shortage of masks.

25) Stewart maintained he was trying to do a public service and plans to tell investigators how he was taken for a ride by the multiple layers of intermediaries, fixers and lawyers standing between respirator mask producers and front-line workers.

26) But the ultimate unraveling of his $34.5 million deal provides a rare window into the federal government’s mad scramble to buy PPE in a “wild west” black market …

27) The VA agreed to pay nearly $5.75 per mask, a 350% markup from the manufacturer’s list price. One of the experts I talked to said that’s “absolutely” price gouging. Another said the VA and other agencies are fueling this black market by setting such high prices.

28) I asked a VA spokesperson why any of this, the FGE contract & intermediaries, was necessary. Couldn’t the VA just buy masks directly? “To meet the remainder of its N95 respirator needs, VA conducts additional acquisition activities with other vendors,” a spokesperson said.

29) Stewart was not the only untested contractor tapped for supplies. The Trump admin had handed out at least $5.1 billion in no-bid contracts to address the pandemic, federal purchasing data shows. Stewart maintained that he was going to get the masks to the VA but ...

30) In the end, after ProPublica asked questions, the VA terminated this contract and referred the case to its inspector general. The VA ended up with zero additional N95 masks from Stewart. The VA paid no money to FGE. More than 2,200 VA employees tested positive for COVID-19.

32) And if you want to get more of ProPublica’s biggest stories in your inbox, sign up for our newsletter: