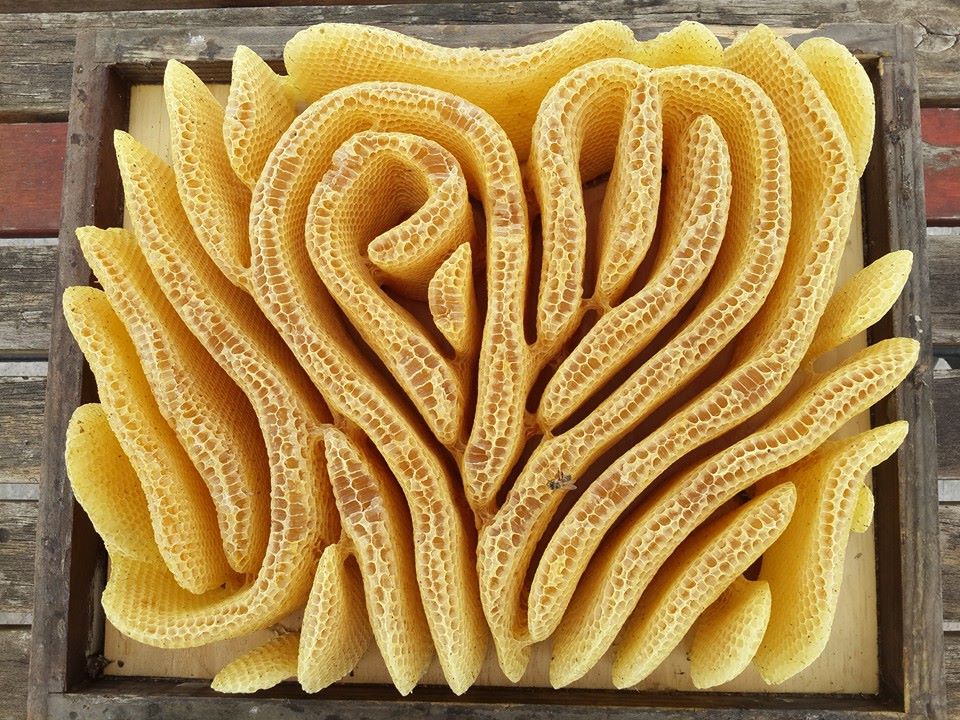 Firstly, I'm a folklorist to trade. Interested in traditions, customs, tales, songs. How things are passed on. In June 2020, an artist published a Tweet saying her parents are beekeepers, who sent her this image from a fellow French bee keeper /2

The beekeeper had left the frame out of his hive, allowing the bees to freeform. Fine. On the thread, people umm-ed & aah-ed about the bees & their skill, how amazing nature is. It was liked over 60,000 & retweeted nearly 10,000 times. But! I had seen this image before. /3

So my folklorist Spidey senses were activated. What's going on here? To be fair, The person didn't *actually* say it was a *friend* of her parents. They could have simply sent her a copy of the image, knowing she was interested in natural history (she is a plant illustrator) /4

Perhaps they simply said, "Hey look at this amazing honeycomb, apparently it's from a French beekeeper". The tweet read "fellow French beekeeper" which could simply mean French person, who is also, like her parents, a beekeeper. /5

Fine. By this time I had done a Google Image Search on the picture. Lots of hits. "Beekeeper forgot to put the frame..." "Beekeeper forgets to put frame..." Hmm. They're from all over the world, and there seems to have been a swell around Feb 2020. /6

Then someone posts a link in the Twitter thread to a @nationaltrust story from August 2015. It was picked up again in Feb 2020 by @mymodernmet and circulated online for a few weeks. 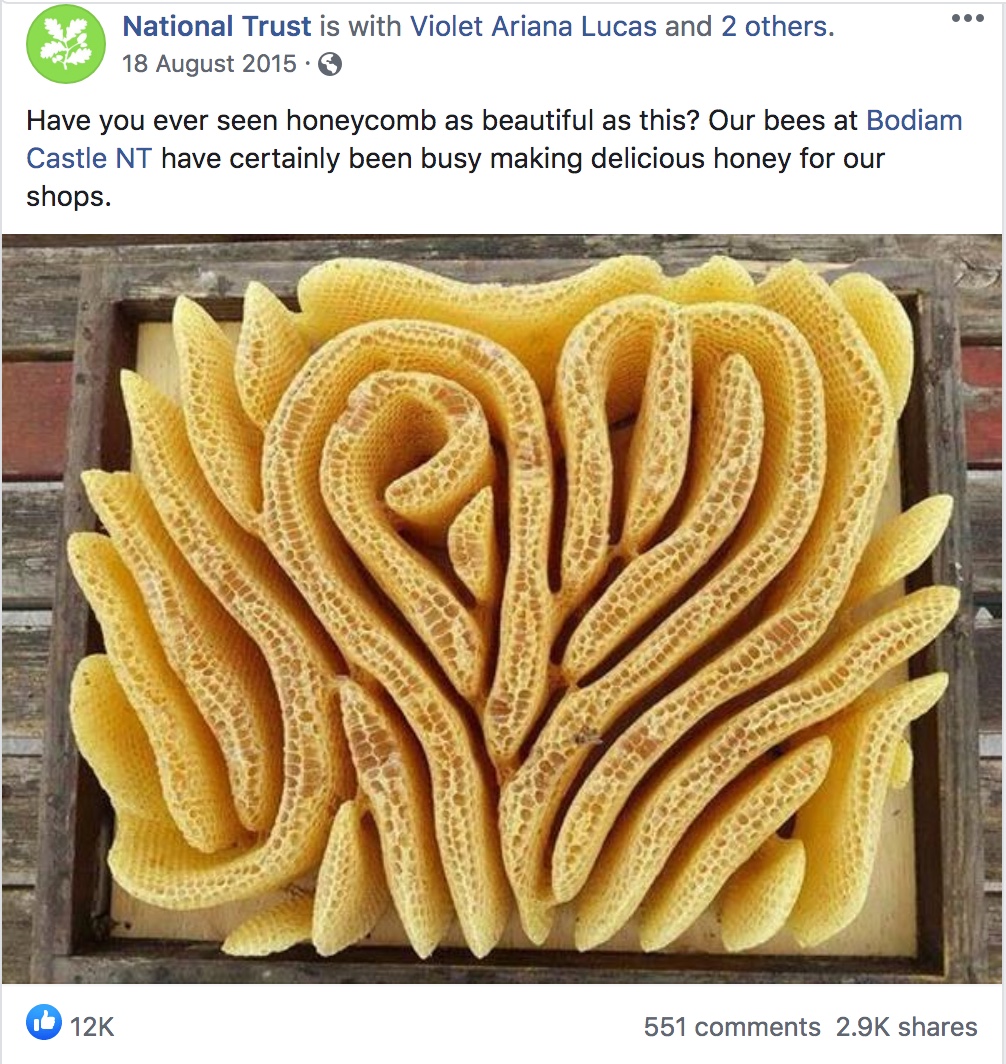 The NT Facebook caption asks people if they have ever seen anything so beautiful. It also says their bees at Bodiam Castle have been busy making honey for their shop. One *could*, therefore, interpret this honeycomb as having been done by their bees. /8

But one could also read it as, "Wow. look at this pretty honeycomb picture, isn't it amazing?" [pause] "By the way, we *also* have bees, who are busy making honey for our shop". /9

Then someone queries the image on the NT FB post, which has been shared several thousand times since 2015. NT doubles down, or at least their social media person on duty that day does. They claim it was made by their own bees at the castle. The "real deal". /10 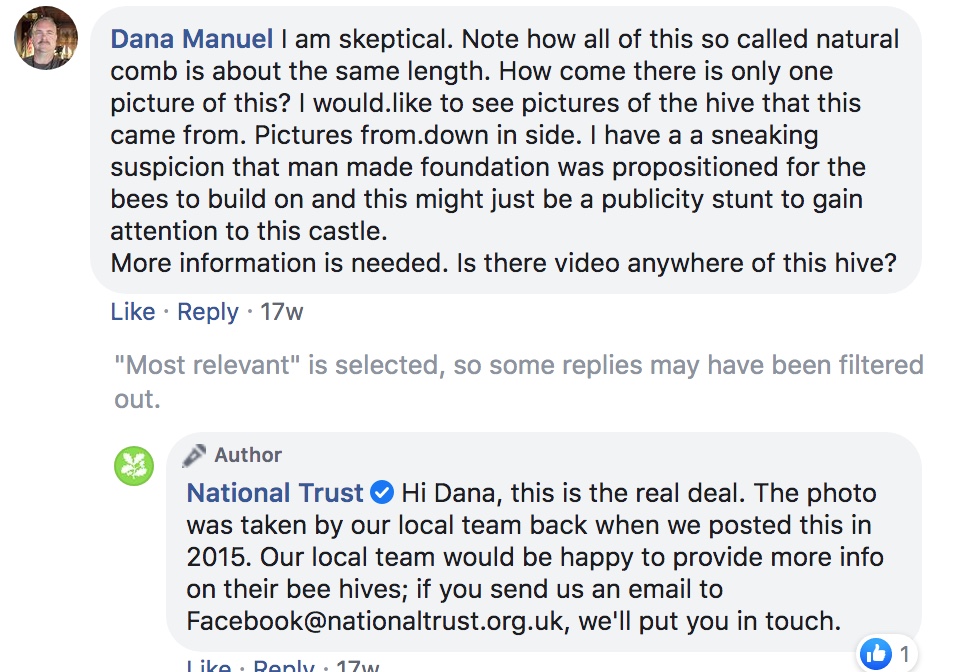 Then we meet Brian Fanner. Brian says in reply to the NT FB post (some 16 weeks ago, which puts us around the time of the Feb 2020 @mymodernmet story, when perhaps Brian became aware of it circulating again): "I made this." Although, Dana doesn't appear to believe him. /11 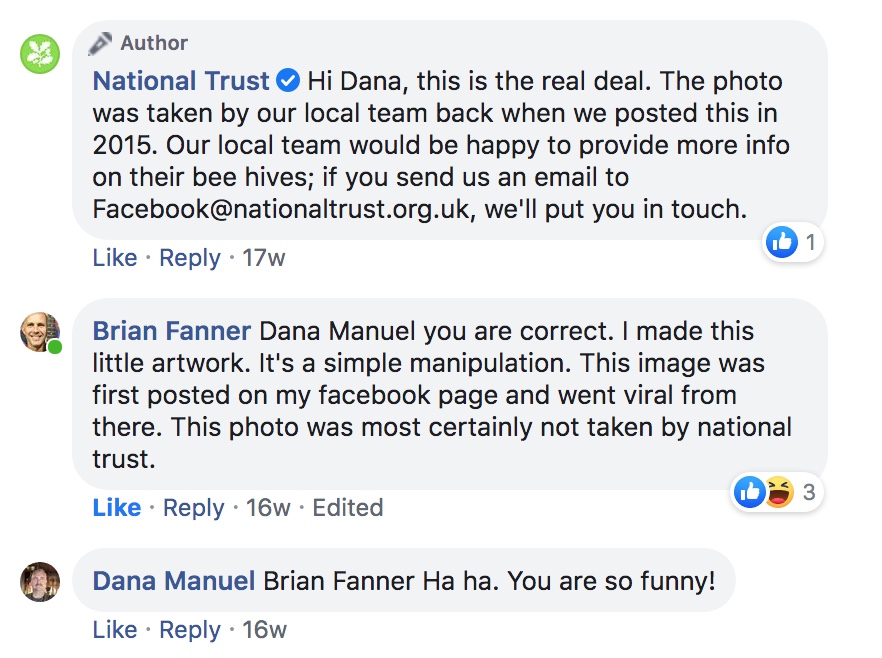 By this time the original Twitter thread was full of people posting the @mymodernmet story, having also done reverse image searches, who proceeded to accuse the original poster of not acknowledging @nationaltrust as the source, rather unfairly, given its clear viral nature. /12

It's quite possible it got to the poster via her parents who had seen it through the many channels it had propagated through. As I said earlier, the wording was ambiguous. Anyhow. Back to Brian Fanner. /13

Brian counters Dana's disbelief with a link to his own Facebook profile. /14 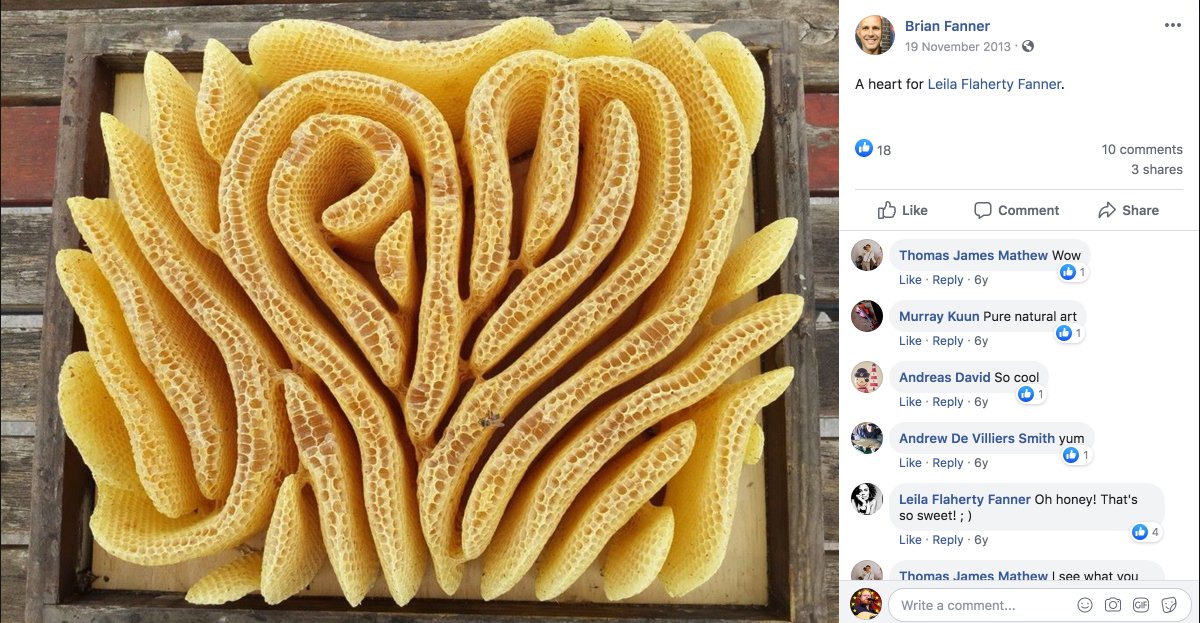 I floated some of this info on the original Twitter thread & was helpfully told that it's possible to backdate FB posts. Didn't know. However, apparently this would usually show a small clock icon near the title, to indicate the date had been altered. This is not the case. /16

Also, it had one visible share from another person, dated Jan 2015. It seems highly unlikely that both the original post (Nov 2013) and the share (Jan 2015) could be backdated together in such coordinated fashion to appear before the August 2015 @nationaltrust FB story. /17

I look into Brian some more. He is listed on his FB profile as a beekeeper. He's quoted in these 2011 articles: https://t.co/IUMH60dGqH https://t.co/ZlGjNcG2Mr as "a smallholder in the Hopefield district of the Renosterveld". In 2011, he ran "Hummingtree Honey". /18

Brian posts further amongst the hundreds of FB comments on the NT story saying that they are Western Cape bees and that he created the image with a simple manipulation in the hive lid. He says bees would not create a heart shape, as they are not that inefficient. /19

Again I've floated some of this on the original Twitter thread, but, understandably, people can't believe that @nationaltrust would have made such an error. So I tagged the NT and Brian on the FB post and asked. /20

The @nationaltrust hasn't replied, as yet. However, tonight, my FB messenger pinged. It was Brian Fanner. /21 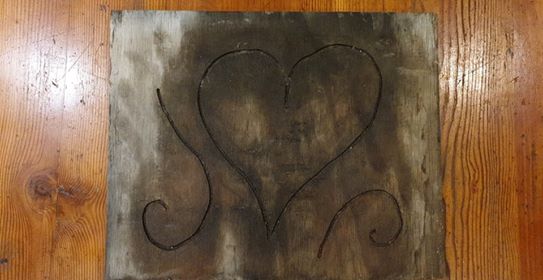 Brian wrote: The things that come up are really funny from how bees have "artistic sensibilities" to bees creating that shape "to increase airflow". I've seen companies using it in their websites and so many claiming it came out of their hive somewhere in the world. /23

Brian continues: "I used this board, routed in the slots... a rush job I'll admit... waxed in some foundation strips into the slots and screwed inside a deep langstroth hive lid and stuck it on the hive. The bees made do best they could..." /24

"The lines are slots into which a foundation wax with the comb pattern on it can be placed...secured with melted beeswax. Normally...a sheet...to guide the bees as to where to build. So they just come across this weird pattern of foundation strip and start building onto it." /25

"After that they just fill it out best they can. It's a simple manipulation. The bees are Capensis. The honey was most likely early season succulent type plant called a 'vygie'. [mesembryanthemums]. Even @Pinterest use this as the cover image for 'bee art'" /26

"I called the image 'a sweet heart' dedicated to my wife...per the very first post of it on my Facebook page in 2013. We scraped all the comb off the board, strained out the wax and consumed...not a very practical artwork to keep." /27

Brian sent me a Google Maps pin of the location in South Africa, but I'll maintain his privacy. Seems pretty convincing to me. But for good measure, I took both photos & overlaid them in Photoshop (as best as is possible, given the slight persective changes). Seems legit, no? /28 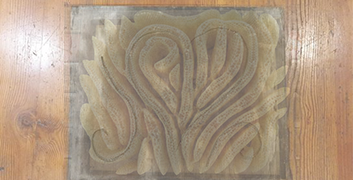 So perhaps @nationaltrust's social media person got the wrong end of the stick in 2015. Unless I have been mightily hoodwinked- on an elaborately detailed scale! - the honeycomb heart image appears to have been around since 2013. /29

It seems to have travelled to many countries & the story has been told and retold. As a folklorist, the giveaway was in the "beekeeper forgot the frame" wording. It kept coming up again & again. That is classic folklore, where a memorable snippet repeats and is passed on. /30

Through the folk process, albeit on the internet, a tale was woven over nearly 7 years and wound up with the parents of a very talented artist @sarahgalerie who probably thought she'd be interested in seeing such a lovely thing. /31

Because frankly, it is lovely. It's something that we all want to believe in, that bees & Mother Nature would come up with this by chance - or indeed, by design. It turns out it was a lovely bit of synergy between humans & nature by a South African beekeeper called Brian. /32

And that, folks, is what we call Internet Folklore, where stories spread and change quicker than ever, and involve communities of people experiencing a simple yet heartwarming tale. /33

The thing to take away? On the internet, search behind what you see. Don't take things at face value. Don't let your "aww" gene get in the way of thinking, hmm, is this for real? Because there are people out there who seek to use such kindly human instincts in unkind ways. /34

What about Brian & the bees? They're planning their next moves. "I do want to do another but each season comes around and I don't get to it. I'll do one this year. Still trying to decide what to do." Let's see what the internet makes of that. 🧐 35/35 THE END.