For years, fans of THE MATRIX have discussed the film through a trans lens. If you’ve heard the theory before or just learned about it, here’s a thread breaking down the trans allegory of the film, from trans writers and critics. Welcome to the desert of the real. (thread)

Lilly Wachowski recently looked back on the film and confirmed the long-discussed theory of THE MATRIX as an allegory for gender transition. “THE MATRIX was all about the desire for transformation, but it was all coming from a closeted point of view."

So how is THE MATRIX super trans? Writer @andrealongchu sums it up in an excerpt from her book “Females,” for Vulture: “Neo has dysphoria. The Matrix is the gender binary. The agents are transphobia.”

The “splinter” in Neo’s mind? That, for many trans folks, is a lot like the experience of being socialized as a gender that doesn’t align with their true gender identity.

Upon “waking up,” Neo begins his transition from one identity — Thomas A. Anderson, a name given to him by the machines — to the one he sculpts for himself — Neo, his chosen name.

Critic @willow_catelyn writes about the significance of Neo rejecting an old name (ie his deadname) for a new one (his chosen name) in her thread about the film’s legacy:

Interesting, isn’t it, how Agent Smith only refers to Neo as his deadname, Mr. Anderson, with a persistent emphasis on the “mister,” which Eleanor Lockhart, a professor at Rowan University, wrote about back in 2016. 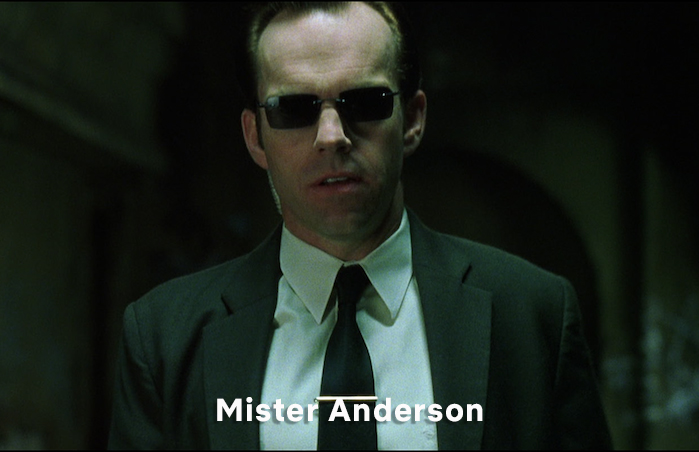 And then there’s the whole red pill, blue pill connection. Not only is the pill literally Neo’s gateway to seeing the world as it is and the systems built to define and control his identity, but it’s also an apt metaphor for hormone therapy.

The rabbit hole goes deeper. As Chu writes, for years trans women have pointed out that in the ’90s, prescription estrogen was quite literally a red pill.

There’s also the character Switch (Belinda McClory), who was originally written as a trans masculine person. As Lilly Wachowski says, her and Lana's initial plan was for Switch to present as a man in the real world and a woman in The Matrix.

Call it a wild coincidence if you will, but it’s worth noting that one of the very first and last things you see on screen in THE MATRIX is the word “trans.” 🤔

Here’s the real galaxy brain moment: the trans themes of THE MATRIX aren’t only in the plot, but we could also look at the ways the film’s groundbreaking effects offer a visual representation of a trans experience.

Scholar @CaelKeegan, in his book on the Wachowskis “Sensing Transgender,” talks about how THE MATRIX’s visual aesthetics "teach audiences what it might feel like to live in more than one body."

Look at bullet time: a technique to split time. Or as Keegan puts it, bullet time “gives the sensation of two temporalities at once… an effect resonant with the experience of gender transition and its multiple embodiments across time.”

While the Wachowski sisters weren’t publicly out as trans while making the films, in the doc DISCLOUSRE Lilly speaks about the “burbling undercurrent of rage that I felt not being able to be who I was” while making THE MATRIX.

And this brings us to the concept of an egg. In the trans community, an “egg” is word for a trans person who hasn’t realized they’re trans yet. As Vox critic @emilyvdw writes, THE MATRIX “is maybe the eggiest movie ever made.”

Some have rushed to call Lilly's recent acknowledgment of the trans themes in THE MATRIX “revisionist” or “retconning.” And to that I say, who are you to tell not only a creator, but also a trans person, what was or wasn’t present in their minds while making their own film?

While the Wachowski sisters coming out post-MATRIX may have prompted fans to revisit their filmography through a trans lens, they were always trans women and THE MATRIX is and always will be a film by two trans filmmakers.

In the final scene of THE MATRIX the camera zooms towards the words “System Failure” in code. Neo says, “You’re afraid of us. You’re afraid of change” as the camera pushes through the letters “M” and “F,” quite literally creating a space in between, and beyond, the gender binary.

Lilly and Lana Wachowski gave us one of the most influential, enduring, and celebrated films of all time. Through THE MATRIX, they gave trans people the possibility of a cinematic world without borders or boundaries. A world where anything is possible.