The limited vision of the Stanton/Anthony Statue Fund is lightly referenced in today's NYTimes. If you're teaching #wmnhist this Fall, you might want to tweak the essential @Monument_Lab question & ask, what is an appropriate monument to women's rights? This might be a thread. /1

First, I want to note how much I admire sculptor Meredith Bergmann. She had a thankless task, as the winning design for a CFP that asked to create a monument with Stanton and Anthony at its center. [Check out @hyperallergic's amazing reporting on the design meetings.] / 3

Meredith Bergmann's Boston Women's Memorial (which I finally got to see this winter before quarantine!) is one of my favorite monuments, because it plays with the idea of who is monumental. The women, and the ideas they represent, are larger than life. /4

Compare it, say, with another of my favorites, Sharon Hayes' work for Monument Lab, the 2017 installation "If They Should Ask" in Rittenhouse Square. It might blow your students' minds (https://t.co/EP4jqly0Rs) But I digress. /5 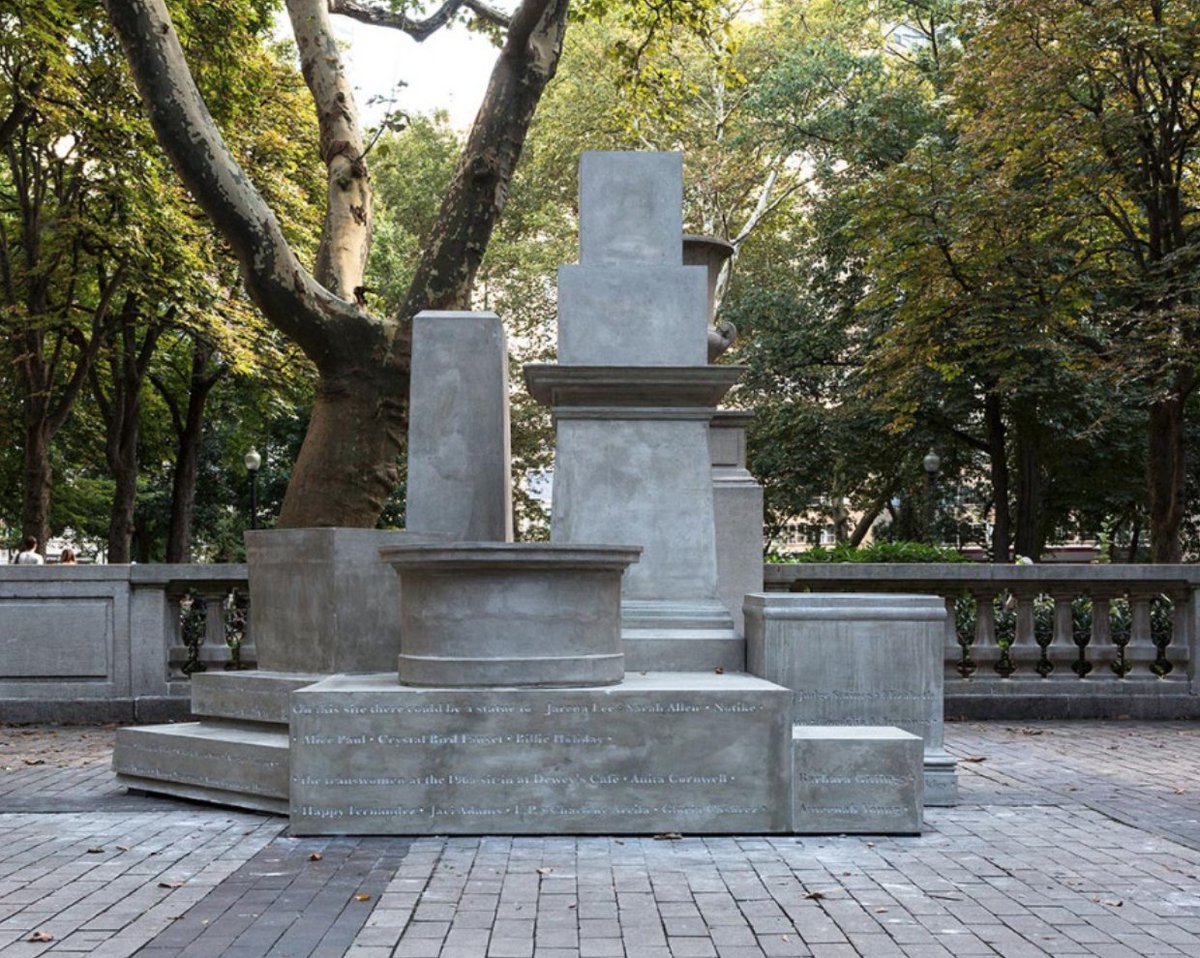 Back to Central Park. As the NYT notes, "called the Women’s Rights Pioneers Monument, it is to be unveiled Aug. 26 to commemorate the 100th anniversary this month of the constitutional amendment that finally guaranteed women that right." /6

Scholars @marthasjones_ and @CathleenDCahill can school you on why the end of that sentence misrepresents the long history of voting rights. And Martha wrote one of the most powerful op-eds on the monument mid-design:

I'd also love to talk with my students about the name the redesigned statue retains, "Women’s Rights Pioneers Monument," and what the language of pioneers 'celebrates' and leaves out. /7

The Times article links to two important critiques of the monument design published in its pages last year, by Ginia Bellafante in January 2019 (https://t.co/cSL62QrWTF) and Brent Staples in May 2019 (https://t.co/kGOqBMXVZK). /9 You can see the original design here:

Remember, Bergmann won the Stanton & Anthony Fund's RFP to enter a "sculpture competition for a Woman Suffrage Movement Monument [in] Central Park." The S&A fund called for, no surprise, a monument only to S&A. Their documents still live online. /10

It didn't surprise many of us that the first design received pushback, for relegating so many women's efforts, esp. the activism of women of color, to the monument's edges. Putting "real women" on pedestals, an important claim of the S&A Statue Fund, is not a simple solution. /11

Yet here's the S&A Statue Fund president in the Times today: “Everything about this,” Ms. Elam said, “was not easy. It started with the parks department, then it went to the Central Park Conservancy, then the public design commission...It shouldn’t have been so hard.” /12

But maybe it should have been this hard? If we've learned nothing about monuments and memorials in the time of the Statue Fund's work, coinciding with a national reckoning with monuments to the Confederacy...well, you fill in the rest of this sentence. /13

The monument in Central Park is scheduled to be unveiled on August 26. There are lots of ways to teach and talk about monuments this fall, #twitterstorians. Compare the designs. What does it mean to add Sojourner Truth to the pedestal? How do you remember a movement? /14

I wanted to remember this #wmnhist debate so I wrote about it in #Suffrageat100, now up on the Google & soon from @JHUPress. Honestly, the best part's the footnotes: I wrote this to be easily teachable and to send students to a range of case studies. /15

My students will follow along as the Central Park monument is revealed; we'll learn about new laws & city planning requiring representations of women in public space; and about artists and thinkers re-imagining representation (#allmonumentsmustfall?) /17

As I write, 100 years after the Nineteenth Amendment’s ratification, questions of who is deserving of honor, and in what form, have shaped the public history of suffrage (welcome to Twitter, @LisaTetrault2!) /18

But unlike temporary exhibits, public programs, performances, protests, and parades, monument projects promise to permanently change the landscape. As their boosters seek support for new statues, they also find themselves mediating long-held concerns... /19

...concerns about the role of women in contemporary political life and the visibility of women of color in movement politics. What monuments are you teaching next semester? /fin #monumentalwomen #suffrageat100 #wmnhist #19that100 #votesforwomen #monuments #publichistory 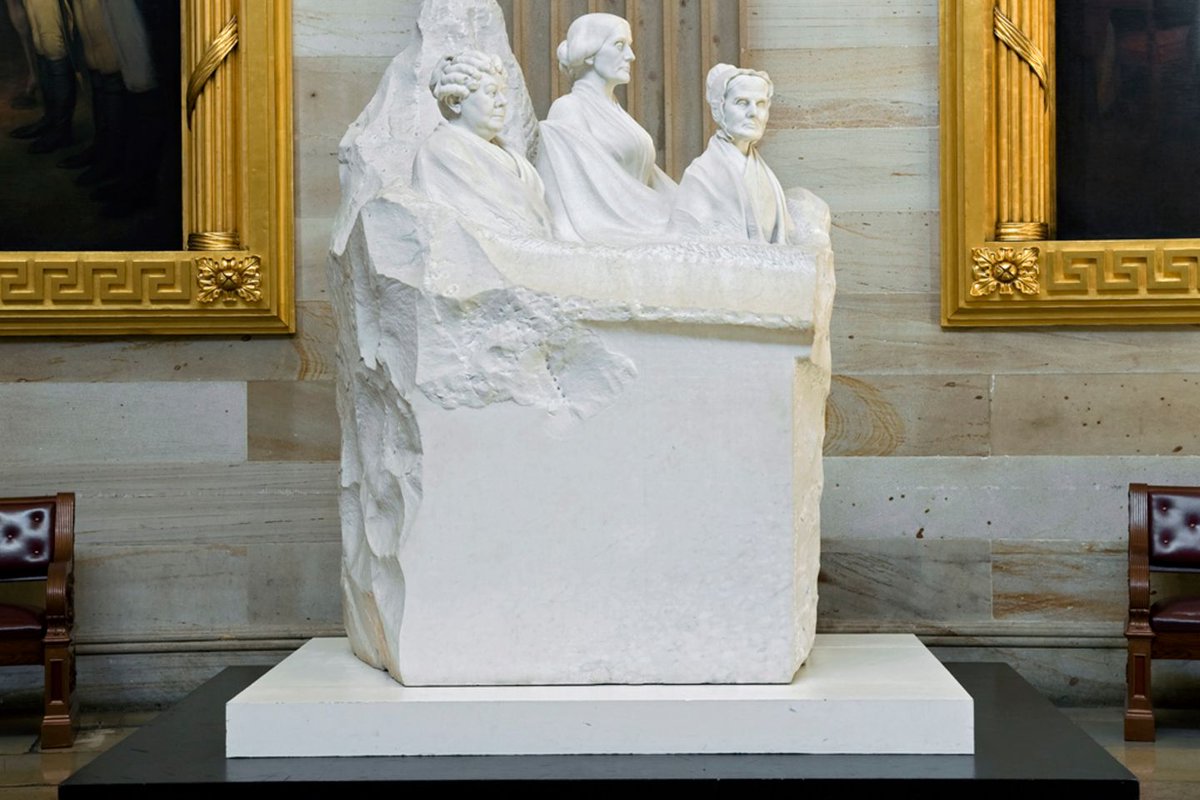 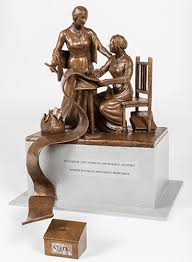