So I got serious about Twitter on April 12th 2020. Since then: I’ve raised over $1MM and met with over 100 future investors in my real estate deals. Made over $20k consulting folks on self storage. Met several folks int in buying my biz. & so much more. What worked for me..

First of all I tried the mainstream advice and built my own blog, podcast, email list, YouTube. Spent 2 years. 500k downloads. Some success. Got more value out of Twitter in 30 days. If raising money or in business THIS is the platform. Okay let’s go:

1. Stay on topic. The most valuable folks here are here to learn. They curate their feed. They want business and interesting discussions. No fantasy football. No gifs. No pop culture. No one liner jokes. Be an expert at what you do. Mix in family 1x a week or less.

2. No politics. At all. Ever. It’s a great way to piss off (and say goodbye) to 1/2 the folks here. Not everybody feels the way you do and the smartest folks don’t want your opinion. Nothing good comes of it. So avoid it.

3. Be incredibly open Nobody will steal your ideas. Yes it’s uncomortable and yes you’ll get challenged. I shared my profit and loss statements on here. It led to discussions with many brilliant folks in the DMs and several folks who wanted to partner reaching out.

4. Put your neck out. Don’t be afraid to look like an idiot. Challenge smart people by retweeting and commenting. Good things come if you do it in a respectful way. Admit a change of opinion if you’re wrong. Reap the rewards if you’re right. Be kind.

5. Quality over quantity. Don’t tweet every 30 minutes. Tweet once or twice a day. Save drafts when you get good ideas. Don’t tweet the thoughtless comments that add no value. Delete them. Creativity comes in spurts. Tweets should be consistent.

6. Don’t link away from Twitter. The algorithm punishes you and your reach will shrink. Twitter wants its users here, on twitter. Link out sparingly and do it later in the thread of multiple tweets. Nobody wants the auto posted blog links.

7. Say more with less. Take out every single character that doesn’t support the message you’re trying to get across. But don’t sound like a furtune cookie. Leave that to the guys like naval who can pull it off.

8. Don’t directly solicit investors. It’s illegal and you should only subtly talk about partners and LPs. Let a conversation start with interested folks messaging you and take it off line to get to know them before giving the pitch.

9. Open your DMs and deal with the volume. Don’t discourage people reaching out because you’re too cool to give a noob some guidance. Ignore the dumb questions. Help some people. Let the value come to you.

10. Story matters more than terms. I have an expensive deal structure. It’s juiced for me. But folks care a lot less about the structure and a lot more about the sponsor (you) and the 10 year vision and tailwinds behind the investment. Tell a story.

11. The best tweets stir controversy and go against the grain but have points that everyone agrees with. Folks on twitter don’t want to get fed the same stuff every other media channel is feeding them. Be different. Make smart people think differently about something.

12. For every tweet think about this question before you hit send: Would I want a future partner or investor who is wealthy and important reading this message? Will this lead to productive conversation?

13. Don’t retweet without comment It adds no value. And don’t make that comment a one word approval. There had to be something the author left out of the tweet or something you can add. Spend 60 seconds and add some thoughts.

14. Have thick skin and don’t get emotional. Some humans are mean. Very mean. Don’t let it get to you. If it does, find another place to do business. This is sales. You will have rejection and not everyone will like you.

15. No negativity, ever Folks are tired of complaining and bad news stories. If you need help with content follow @JamesClear and apply his concepts to your business. He is a master of all of this stuff. I’m not.

16. Add value first Don’t run around twitter with your hand out asking for help. It’s not about you. Help other, smarter, more resourceful people. If you slide in someone’s DMs, bring some value. No, you can’t have a meeting to “pick my brain”.

17. Stay humble. Nobody cares how much money you have, what you drive or where you live. It makes you look foolish. You want to be the rich guy who nobody knows is rich and drives the Toyota Camry. Don’t set your profile up like this: 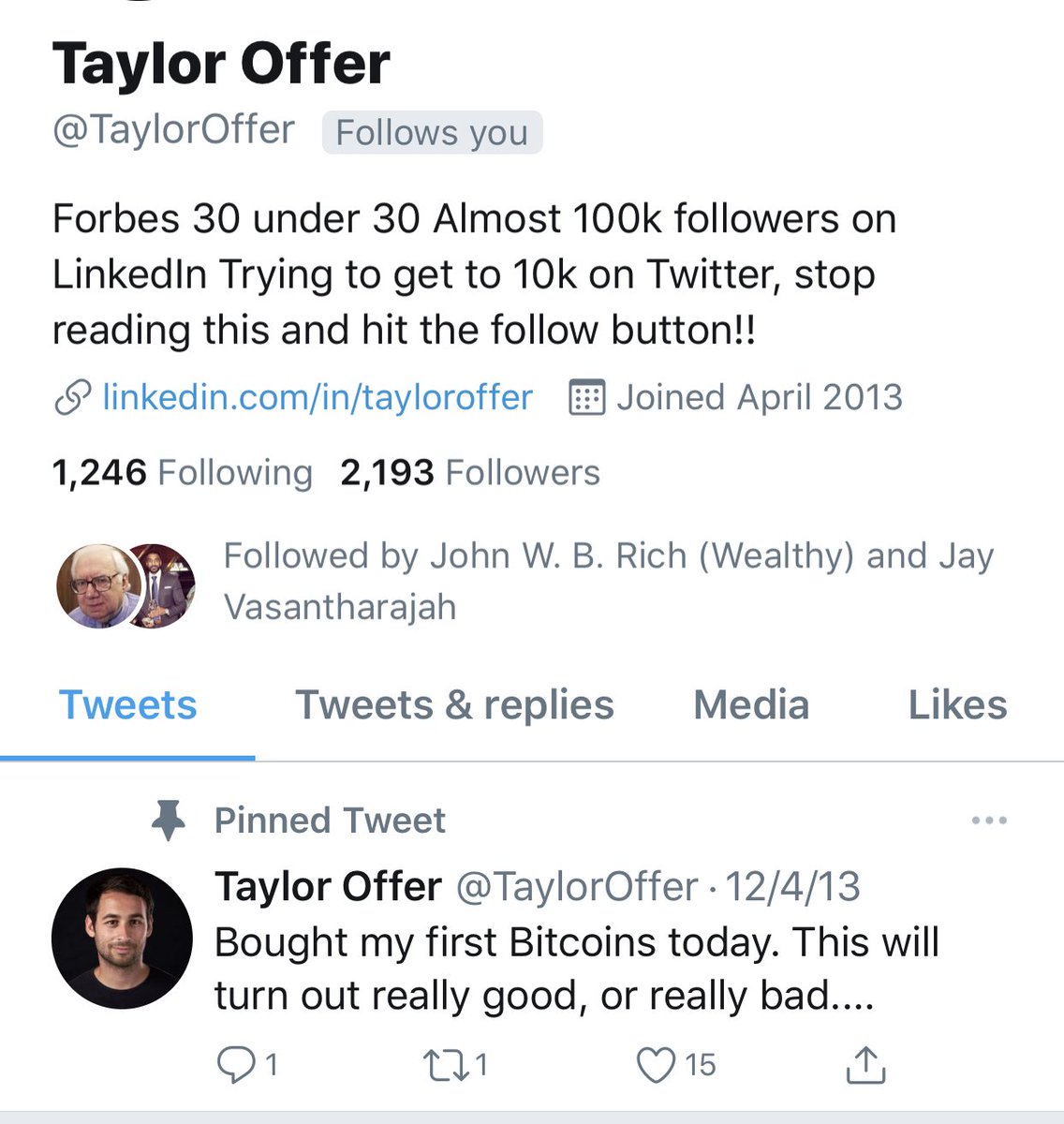 18. Treat this like a job. Because it’s valuable. Do it right and incredible things will happen. Set a goal. Make a plan. Execute even when it isn’t fun anymore. Set your profile up like this: 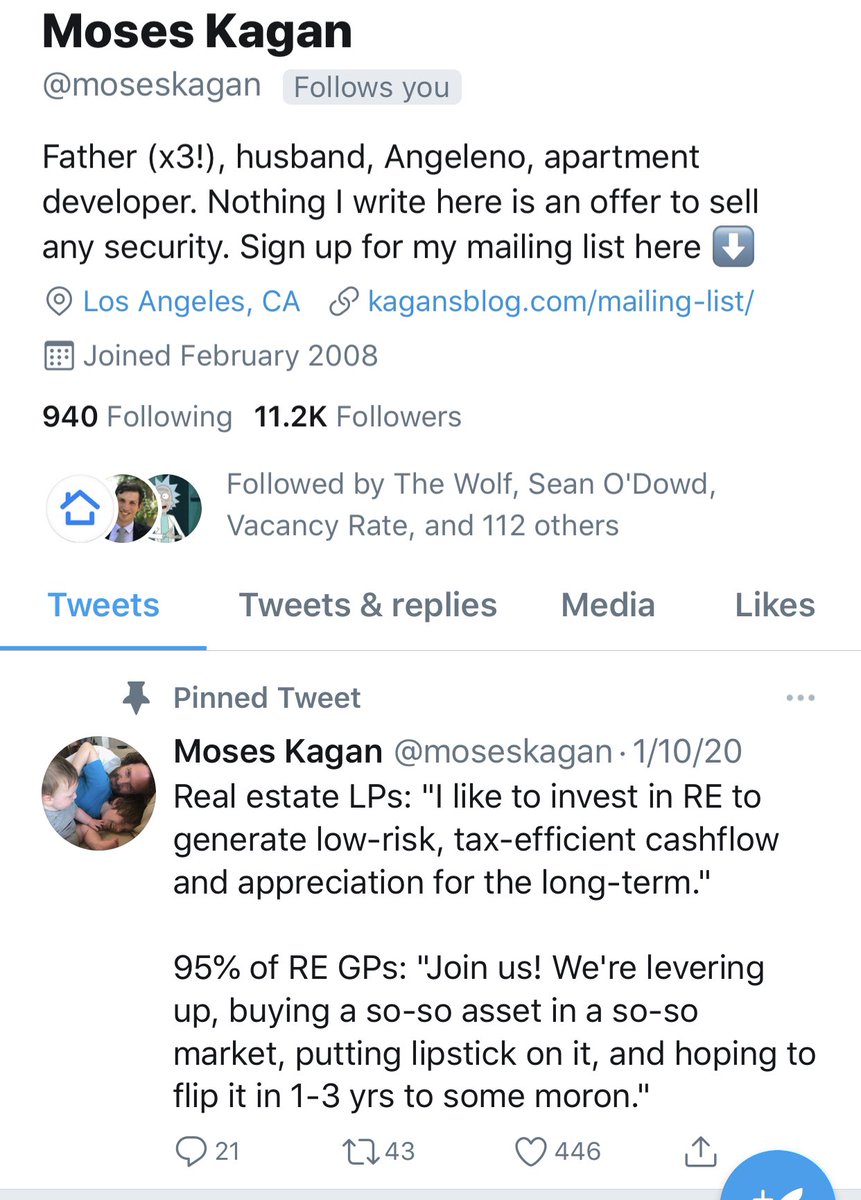 19. Scarcity is bullsh*t Everyone can win. There is plenty of money to go around. Help other people and you’ll get help in return. I only succeeded at this because folks like @moseskagan showed me the ropes. Study first, ask second.

20. Read the book Storyworthy by Matthew Dicks. This was recommended by @theSamParr and @TheHustle. All about telling a story that captivates audiences.

21. Don’t use emojis. It makes you look like a greasy course salesman☝️🤛 Pictures are great, but the simplicity of the written word is what makes twitter powerful. Learn to copywrite well by deleting tweets and workshopping them. I do it all the time.

23. Feel free to break any of these rules. Just like business, there are 1000 ways to win. You do you and I’ll do me! I’m just a guy who acts like he knows what he’s doing. Even a blind squirrel finds a nut every now and then.

A few other powerful things that happened because of twitter: Met a guy who allowed me to temporarily employ 15 of his employees for 2 weeks. I see 5+ self storage deals a week in the DMs. People know I’m into storage. So they ask me advice and bring them to me.

I’ve met 3 mentors that I’m sure will be close to me for the rest of my life. I’m talking incredible conversations about life and what direction to go. I’m very close to doing a self storage buildout in someone from Twitter’s warehouse in upstate NY.

This place is powerful if you want it to be! I hope this helps!

I forgot a very important one. A personal Twitter is MUCH more powerful than an anon or business or branded feed. Folks have more trust and are way more likely to want to talk to you if they feel a real human being behind the thoughts and expertise.