Psychopathic traits you should develop to protect yourself & get ahead in life. Integrate your shadow. Thread 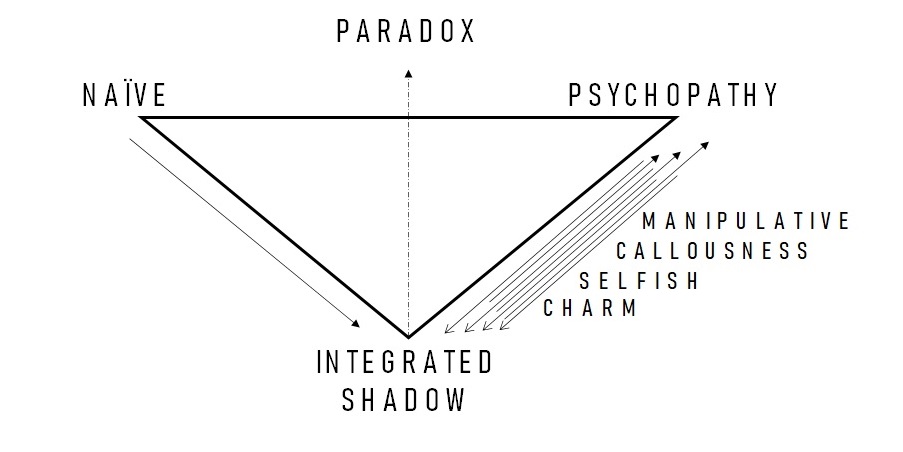 Psychopathy is largely hereditary, but some of its traits are on a spectrum. This means we all, to a degree encompass psychopathy and certain traits can be voluntarily developed.

If your intention is to get ahead in life & rise above others in your line of work, you will be forced to work in a competitive field, not a cooperative one. Contest requires callous attributes to what the average person possesses.

Competence sometimes is not enough in a competitive field. There will be resentful, envious people waiting for the right moment to use dirty tactics to tear you down. You have to equip yourself with traits that can defend & inflict the same amount of damage.

Using psychopathic traits to get ahead comes at the cost of your integrity. This is a disclaimer that the purpose of developing these traits is to employ it only on those willing to use them against you. This is shadow integration.

People think psychopaths have no association with emotions. This is simply wrong. They lack emotions, but they fully employ it as it is their portal to which they can exploit & conquer their victims. They manifest it themselves anytime at will, for objective selfish purposes.

1. Lack of empathy The competitive field provides value on the basis of competence, not empathy. Detachment from emotions is a necessity. Emotional people fail to make harsh decisions in the best interest of the business, because of the ramifications it has on 'nice people'.

You need to control your desire in having to care for others. You're not in such position until you care for yourself first. Then you can extend that privilege to those who deserve it & lead them. Empathy is the enemy of contest, a precursor to success.

2. Manipulation You are being manipulated when a request is accommodated with emotions. They will play victim if you refuse, or rejoice if you ask for a favour, only to leverage it against you after. Psychopaths avoid to rationalise because it exposes their manipulations.

Understand emotions if you want to manipulate. If you cant manipulate other people, you're a victim of anyone who can. Learn the empathy triad and exercise it at will to manoeuvre & influence others. And identify when it's being used against you.

3. Empathy Triad Cognitive -To get people to do tasks you want to do that pertain risk. Emotional -To bond with others to reveal weaknesses in order to leverage. Compassionate -Best used by instigating a problem, sympathising with reaction, & then offering an ideal solution.

Observe those who are easily irritated. They are the easiest to apply the empathy triad on & manipulate. Never get irritated yourself. Remain objective, calm and goal-orientated. If you expose your emotions, you are subject to manipulation.

4. Detached You can never offend a psychopath or get under his skin. He will never take anything personally and remain focused on his objective. Treat compliments & insults the same. The former is to make you complacent. The latter is to throw you off.

5. Self-Interest Every negotiation, every action you make should yield maximum self-interest. Your positional ascendency will almost always come at the cost of someone else's. Don't think they wouldn't throw you under if they get the chance themselves. You come first.

6. Indifferent Psychopaths never reveal their interest. They in fact display behaviours that goes against their interest just to mislead others. This is paramount to negotiation & getting what you want. Act as if you're outcome independent.

7. Leverage Use leverage to weaken people's position if they are willing to do the same to you. Your competence is your strength that can leverage them to a chokehold. Their weaknesses are opportunities to exploit & leverage to your means.

If you know they act in bad faith, don't confront them. Be patient & befriend them. Share false vulnerabilities to create a covenant of trust & loyalty, then leverage their own vulnerability to force them into subordination. Make them pay.

8. Charm Charm is the vehicle used to deliver these methods. -Give compliments when they least expect it -Tell them what they want to hear -Fake a vulnerability to bond -Seek consensus over truth -Don't get offended, ever -Pretend to care & listen -Memorise names

Those who ascend in competitive fields, concern themselves with human capital, value exchange & leverage. They lack emotions, & yet have the ability to use them to counter-manipulate others to their end. If you cant do this, you're a victim of anyone who can. No exceptions.

Become a stable paradox. Equip yourself so you can obliterate those who stand against you in bad faith. Only look out for yourself. Only help others when you reach a position that disallows people to leverage your care as a weakness against you. Because they would.