Is digitalization a smart investment for artisans and traditional crafts? | Thread

We conducted a survey to gather information on this topic. To access the main research content, refer to our tumblr blog at:

The survey entries were open for 2 days and the research sample consisted of 43 people, 90% of them residing in Pakistan, 5% from KSA, 5% from UAE. We asked people some slightly controversial question about digital and cultural art. Follow this thread to know more..

We realized that most of our respondents were, somehow unaware about their opinions. This could've been due to lack of understanding.

To direct an unbiased answer along with brief warm-up for the next questions, we prepared a different form to fix the previous issue.

Many of our respondents believed that the implementation of digitalization was practically possible in third-world countries, but failed to realize the strong connection of this answer with the previous question where we asked them if their countries had proper funds to spare

However, almost all of our respondents believed that the essence of originality would be lost if the products were digitally produced

A brief detailing of their opinions 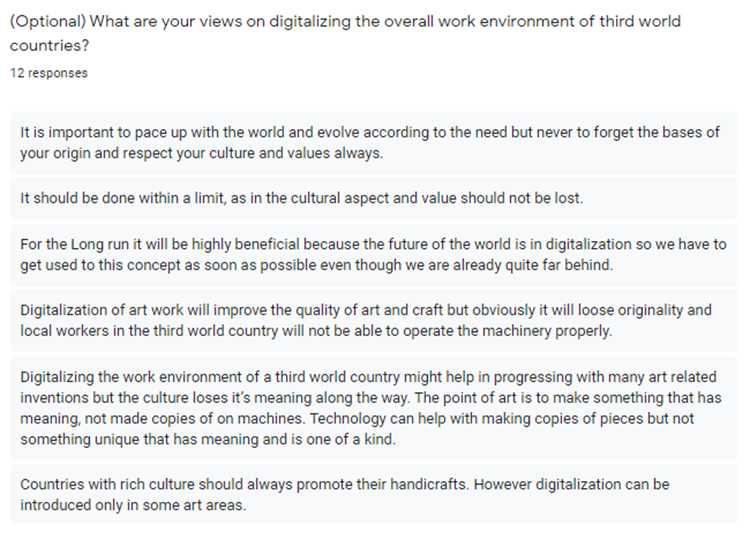 Most of them agreed with these products being high priced in the market..

due to the quality factor that acts as the main feature that differentiates the two products.

Just as technology has proven to be successful in practical fields like architecture and large processing units like steel production, it has, however, prominently negatively impacted the cultural artisans’ community. A lot of our survey respondents viewed this aspect differently

depending upon how much they’ve seen and witnessed. However, the artisans are reluctant in approving of this work environment. Cultural artisans’ from Kalash believe that this development for culturally infused people is a downgrade, as work environment exists because of culture

and the handicrafts they produce exists because of their culture. Digitalization would take away the essence of their culture, ultimately taking away their originality. This has been proven true by fast developing countries and rich economies like the U.S, which has far developed

and industrialized their arts production sectors; have no essence of culture in their work environment. Native Americans, who are now the cultural remnants of this country’s history, keep getting fewer in number, as they all move out to the cities and adopt the modern culture

and leave behind their native culture. In addition to this, most culturally infused societies are usually not financially well-off, therefore, they are unable to implement digital components in their work environment.

Therefore, this proves that digitalization for the cultural artisans’ in a relatively poor economy is impractical and most likely not beneficial. Third-world countries like Pakistan, India, Bangladesh, Indonesia etc., have limited resources to spare, and they usually end up

getting invested for higher priority matters, for example; food, water, electricity etc. Hence, it is virtually impossible for them to supply huge funds on machinery. This decision can, however, be different for different production fields like construction industry,

car production etc., and for rich economies, who can afford the cost of digital implementation.