There were few crucial weeks in Feb and March when cases were just starting to rise. Let’s zoom in on these four weeks and see how the early signals were missed, valuable time was lost and Indians were led to believe that they were immune to COVID. Thread 1/n 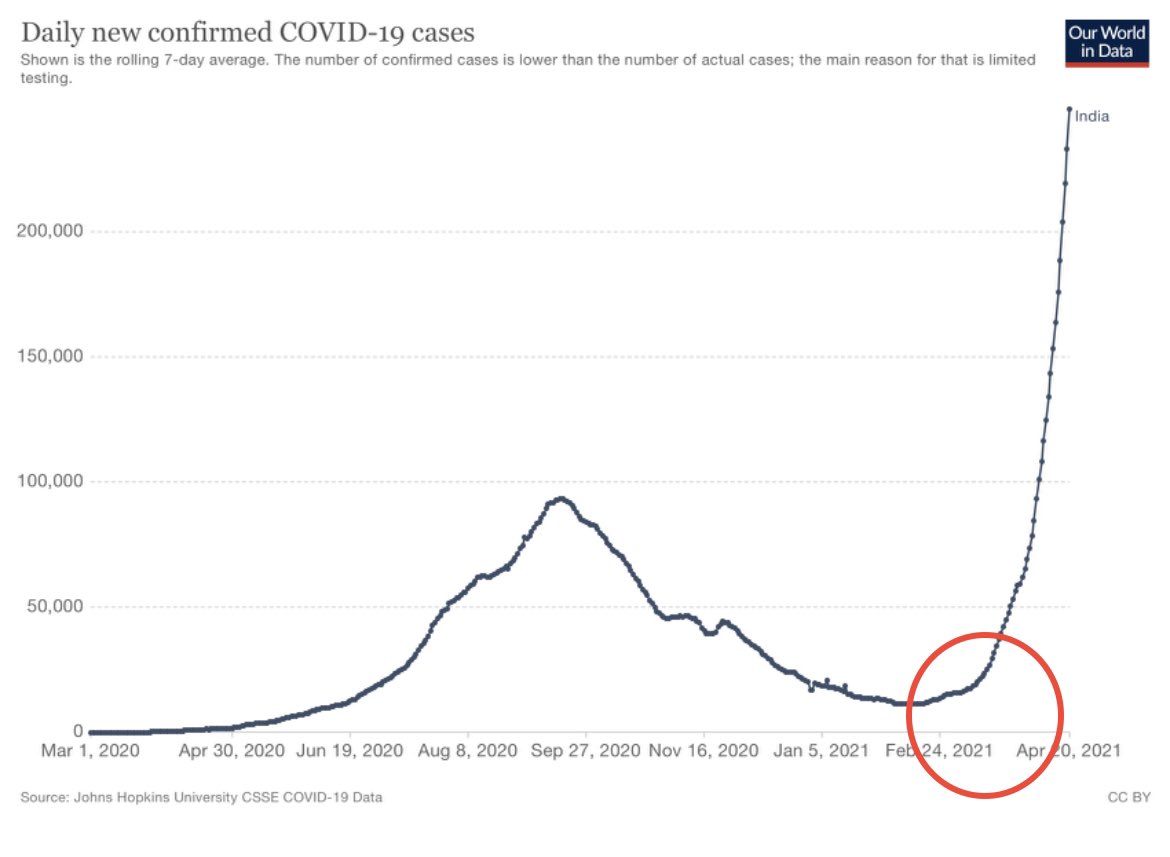 First, the backdrop: PM Modi speaking at World Economic Forum on Jan 28, 2021 said that fears about a COVID Tsunami in India were unfounded as India had not only defeated COVID but it has also built adequate infrastructure to handle it. 2/n

Feb 19th. Daily cases were around 15,000. Health minister and his cabinet colleague, Gadkari were seen at Patanjali’s event where Coronil was touted as a ‘cure’ for COVID-19. Their presence an indirect endorsement of the claim. 3/n 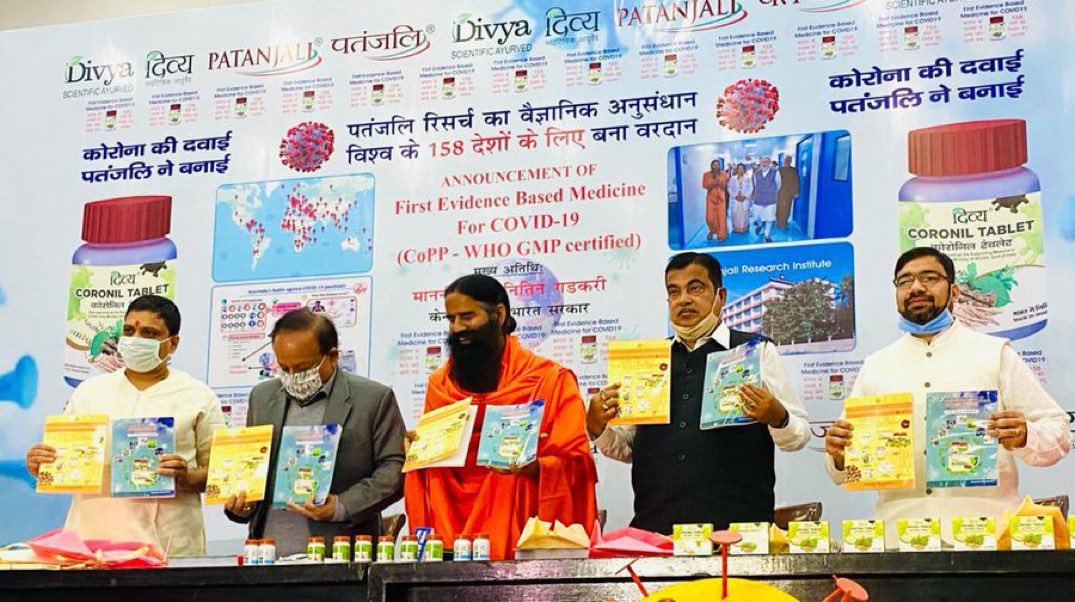 There was a recognition that second wave was already looming but media played along in publicizing that a ‘cure’ had been found and approved by WHO. WHO had to come out and clarify that this was false. 4/n 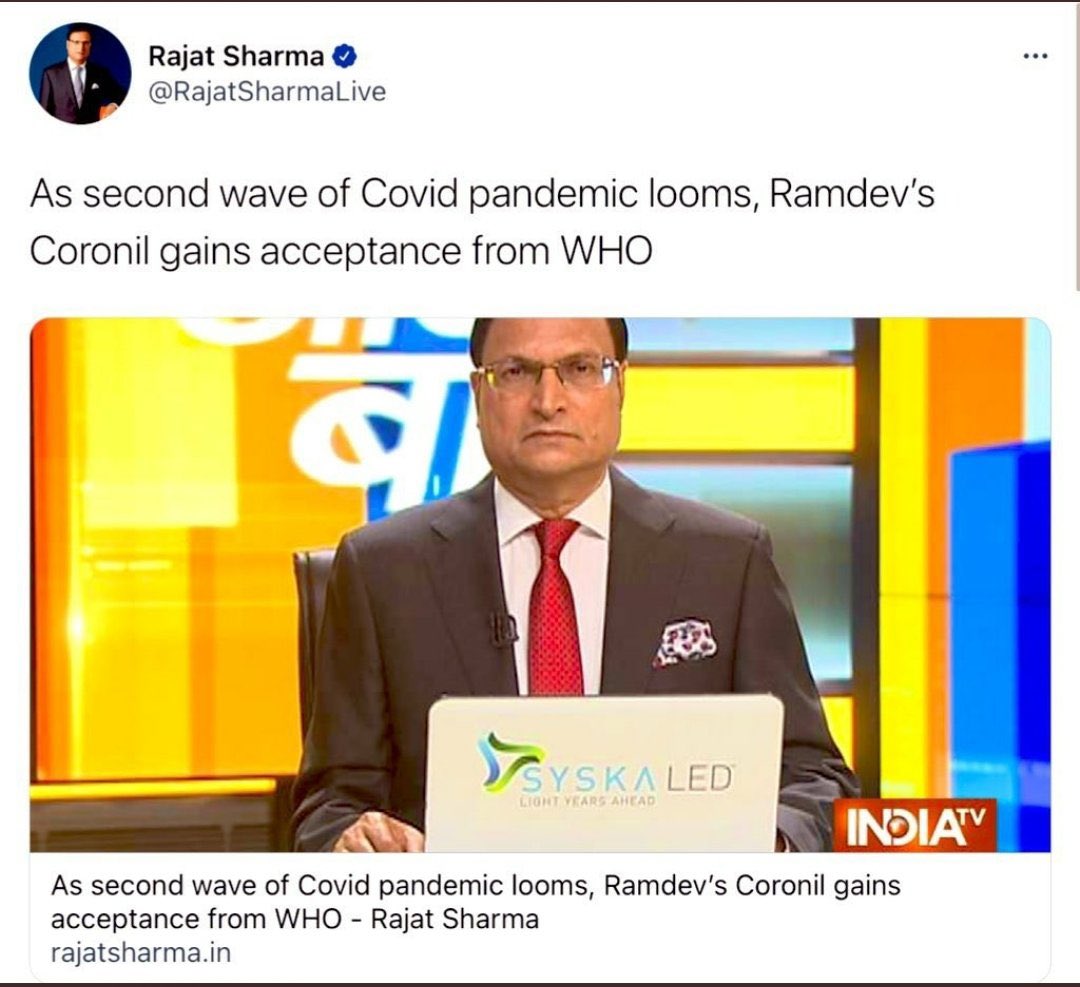 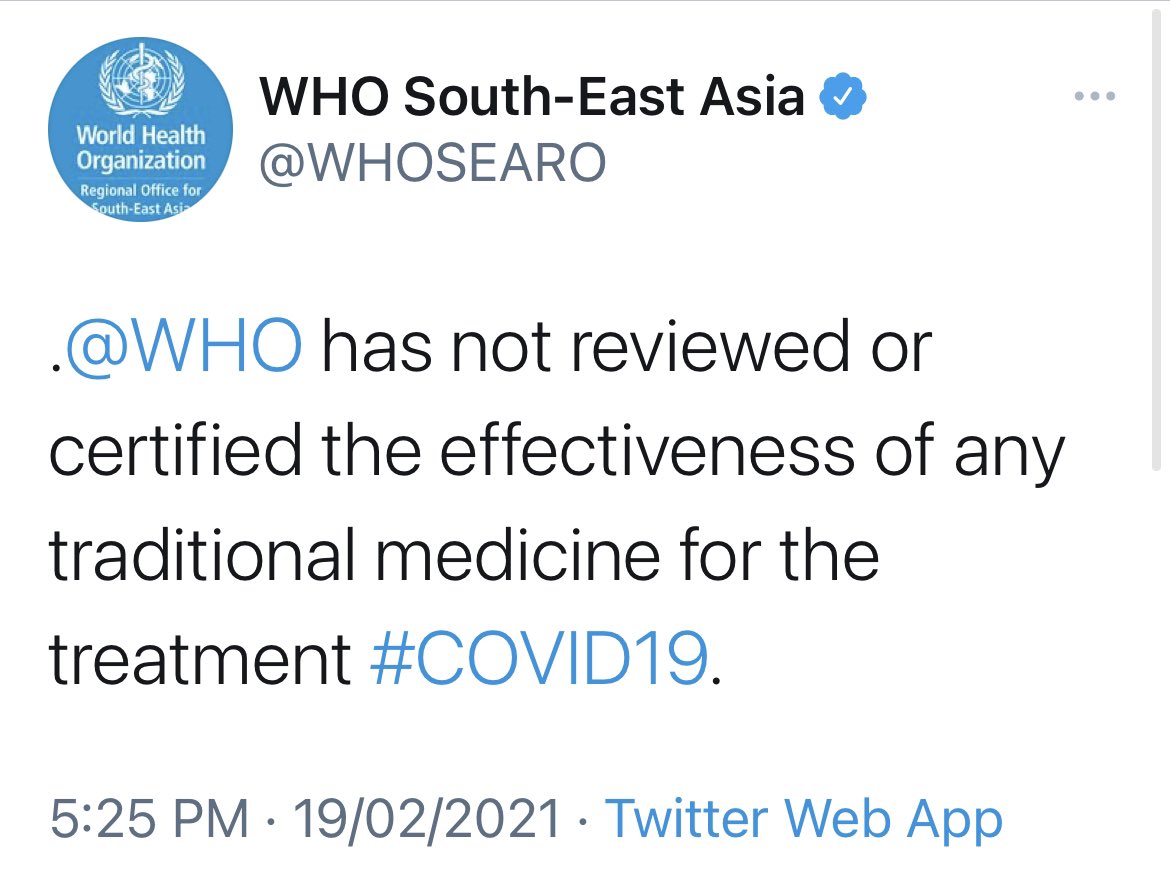 Indian Medical Association (IMA) demanded an explanation from Harsh Vardhan: ‘Being the health minister of the country and a modern medicine doctor, how ethical is it to promote the unscientific product to the citizens of the country?’ asked IMA. Went unanswered. 5/n 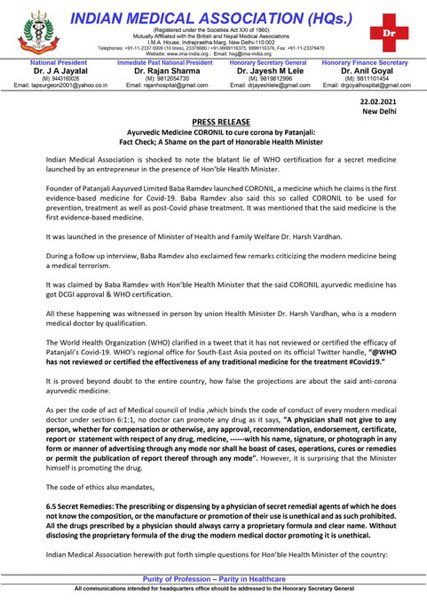 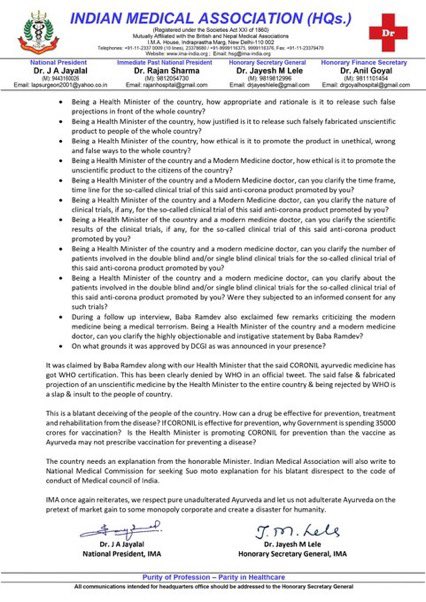 March 7th. Number of daily cases continued to rise and now stood at 18,700, the highest in more than a month. Health Minister meanwhile announced that COVID-19 pandemic which brought the whole world to its knees is in the ‘endgame’ here in India. 7/n 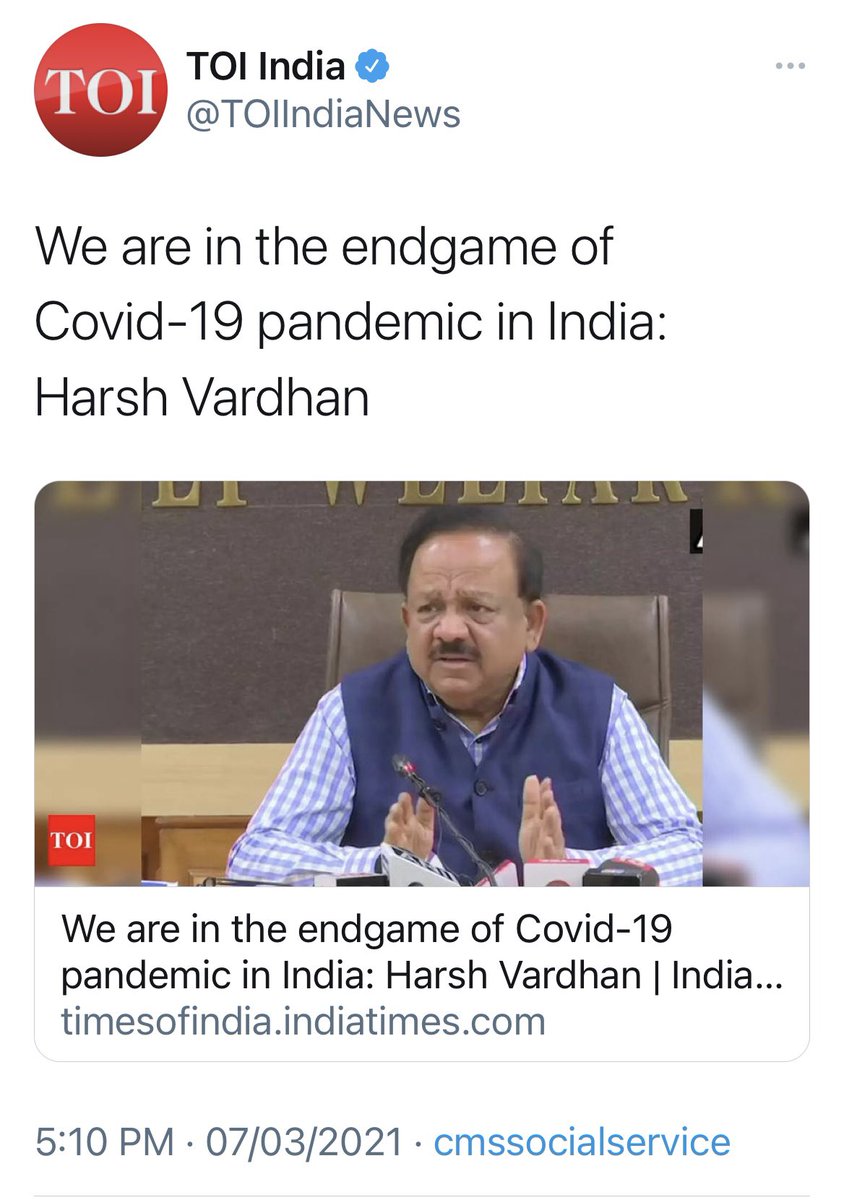 IMA once again slammed Harsh Vardhan’s endgame statement cautioning against a false sense of security. It warned against blowing our own trumpet and off guard our preventive measures against this dreaded disease at this stage. 8/n

Meanwhile in West Bengal, election rallies of all political parties were in full swing. It was almost as though COVID did not exist in India anymore. 9/n 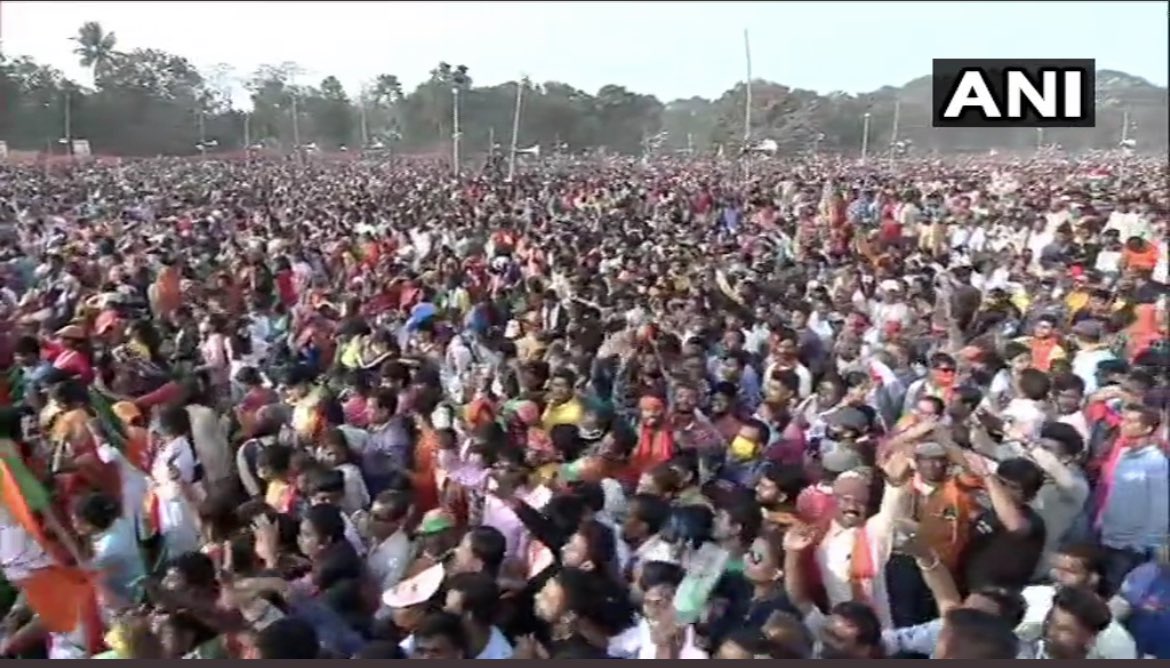 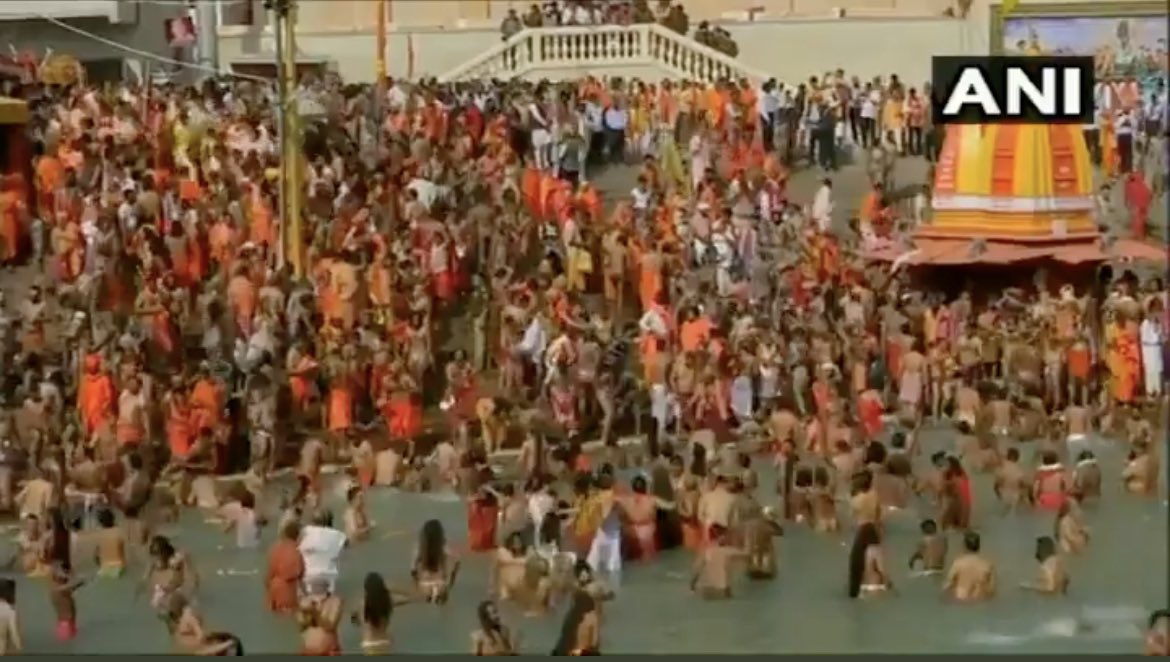 But after talking of ‘Covid appropriate behavior, the Health Minister went back to sharing pictures of rallies and boasting about the crowd. His Twitter TL was full of such posts. 12/n 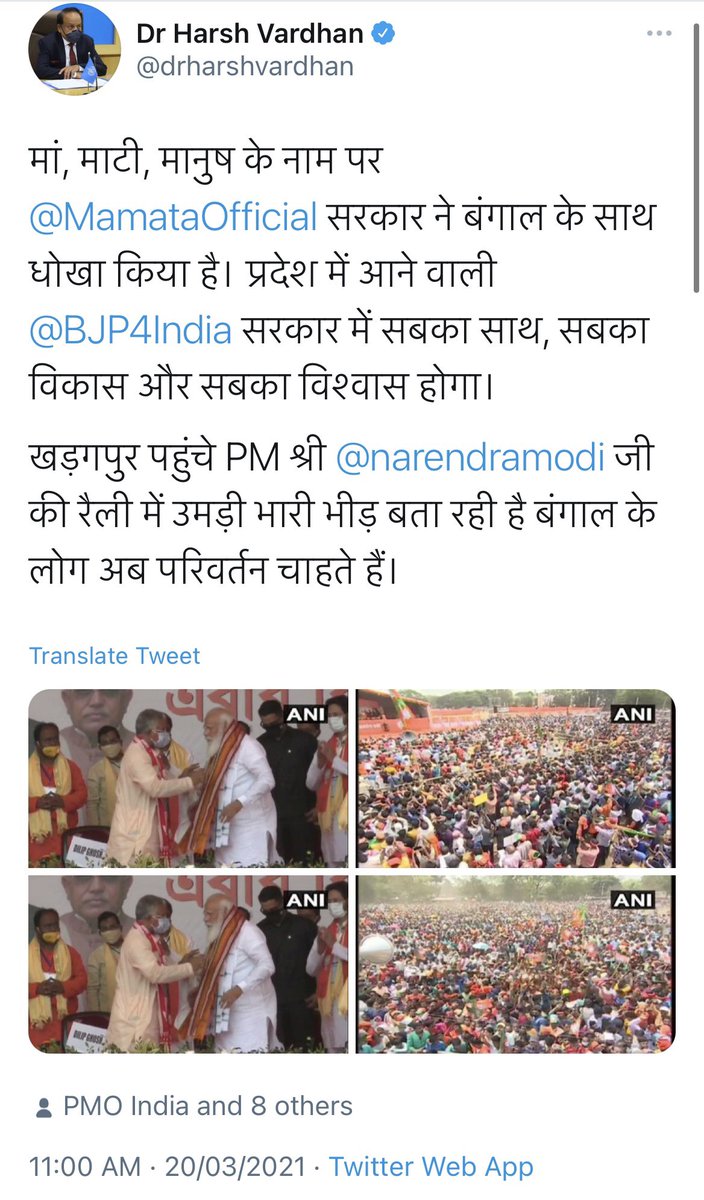 March 26th. Number of daily cases had climbed to 62,000. But from ministers to WhatsApp groups, the focus was on positioning PM Modi as a global leader taking India on the path of becoming a Vishwa Guru. Vaccine certificates in India even carried his photograph. 14/n

Other countries were busy securing vaccine supplies for their citizens and we were bragging about our vaccine exports, which included grants, commercial transactions and contractual obligations of SII to GAVI. 15/n

March 29th. All caution was abandoned during Holi celebrations. 16/n 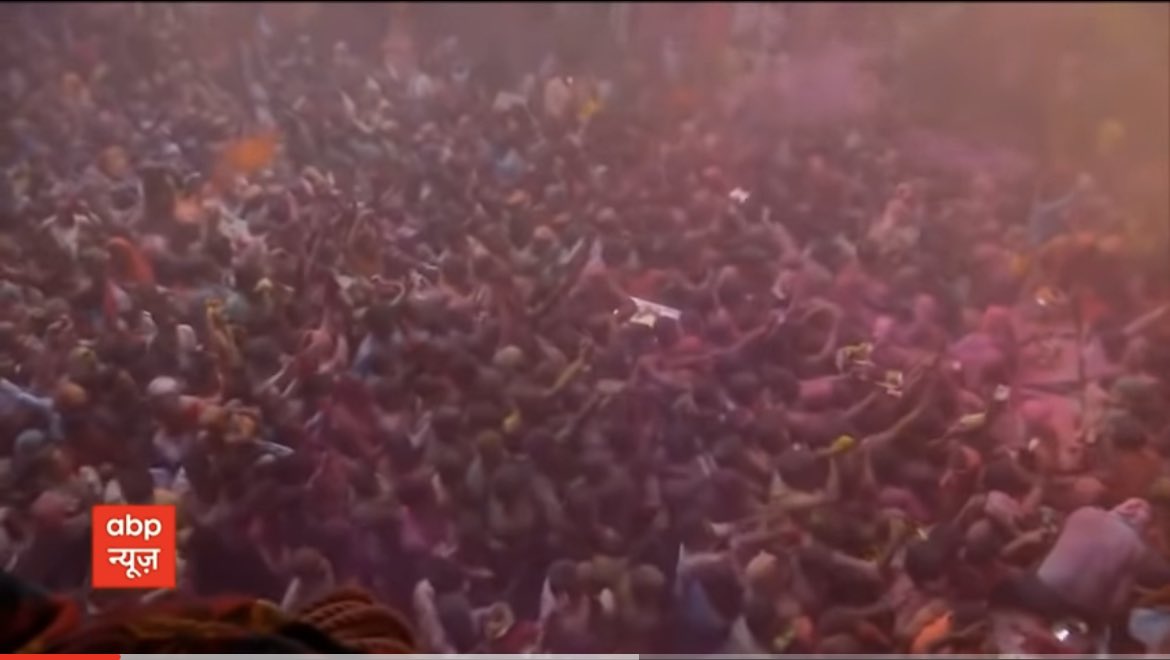 It is now emerging that India’s national scientific task force on COVID-19 did not even meet in Feb and March. Such was the complacency. 18/n

Time that should have been spent in building medical infrastructure was squandered. Complacency had set in, guard were let down, mass gatherings were allowed. People were led to believe that it was over. That India had won the war against Corona. 19/n

Needless to say, we have a pliant media that survives on triumphalism and acts as extended PR arm of the government. Asking questions is not their forte, unless it is to the opposition 20/n 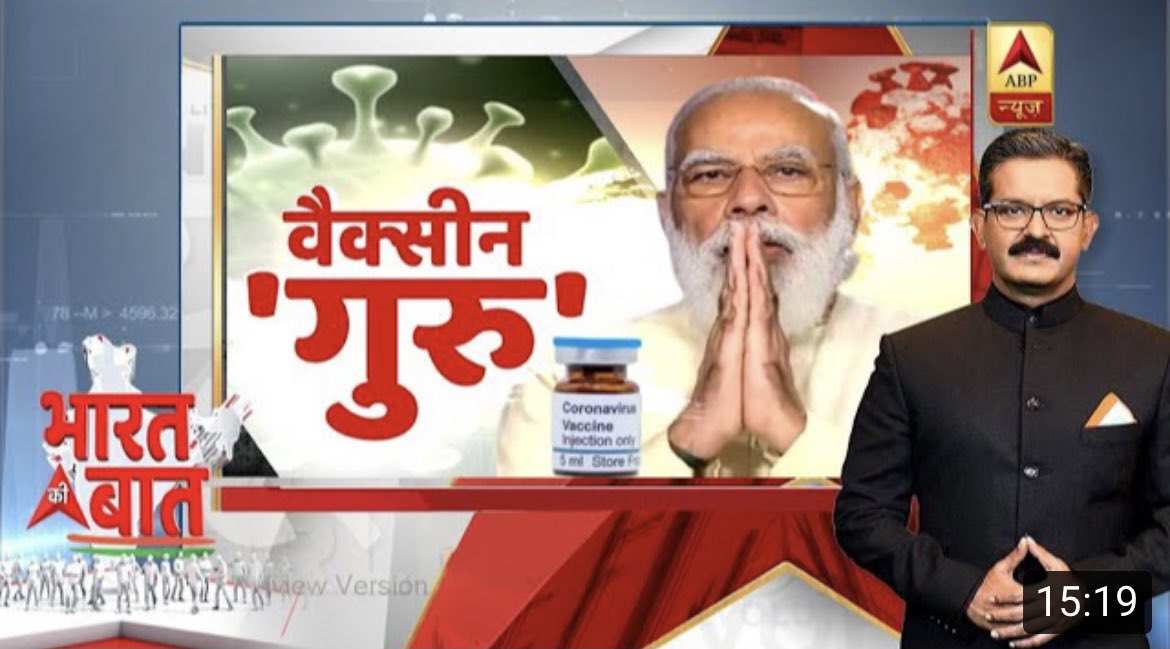 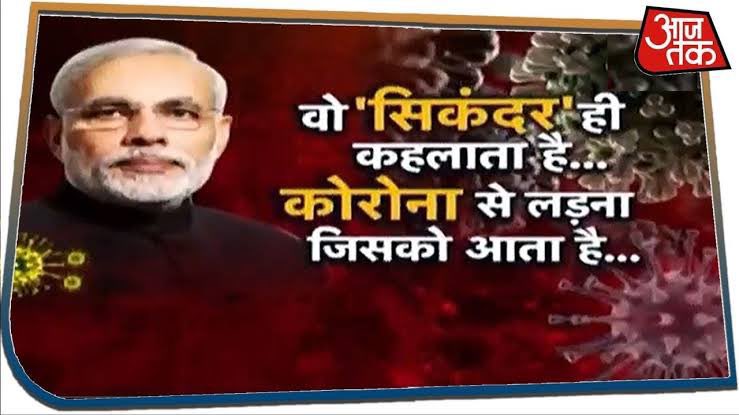 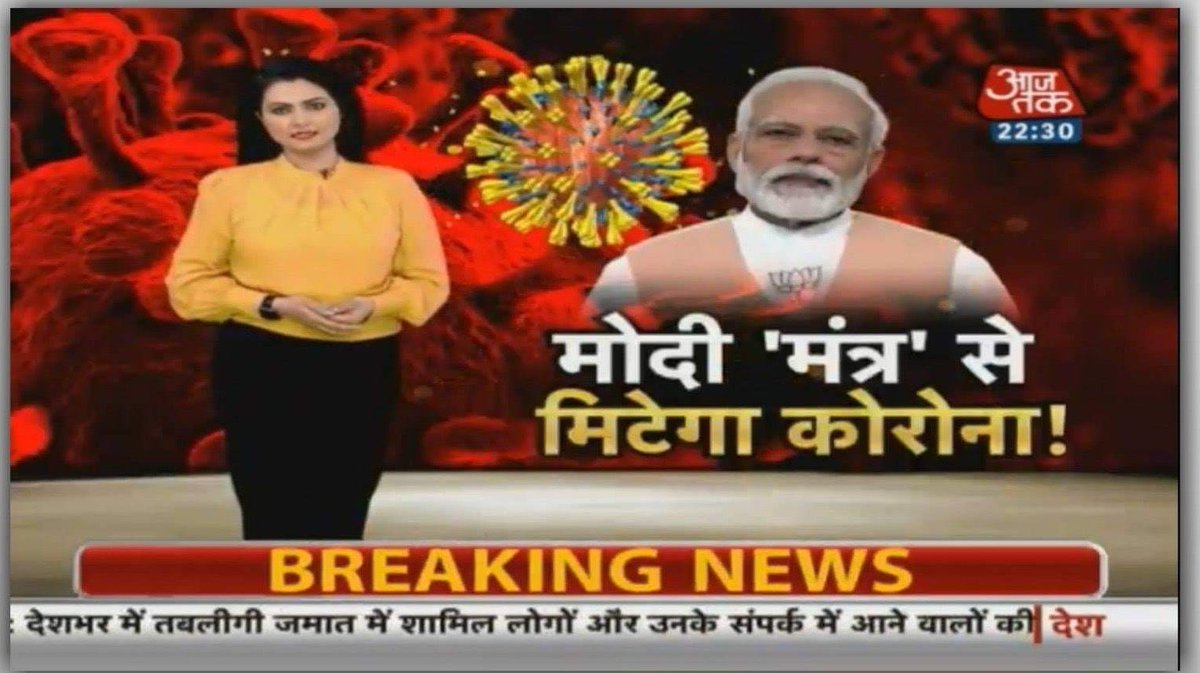 The same media that had pounced on Tablighi jamaat last year raised no alarm at the gatherings in Feb/March. No questions asked. 21/n 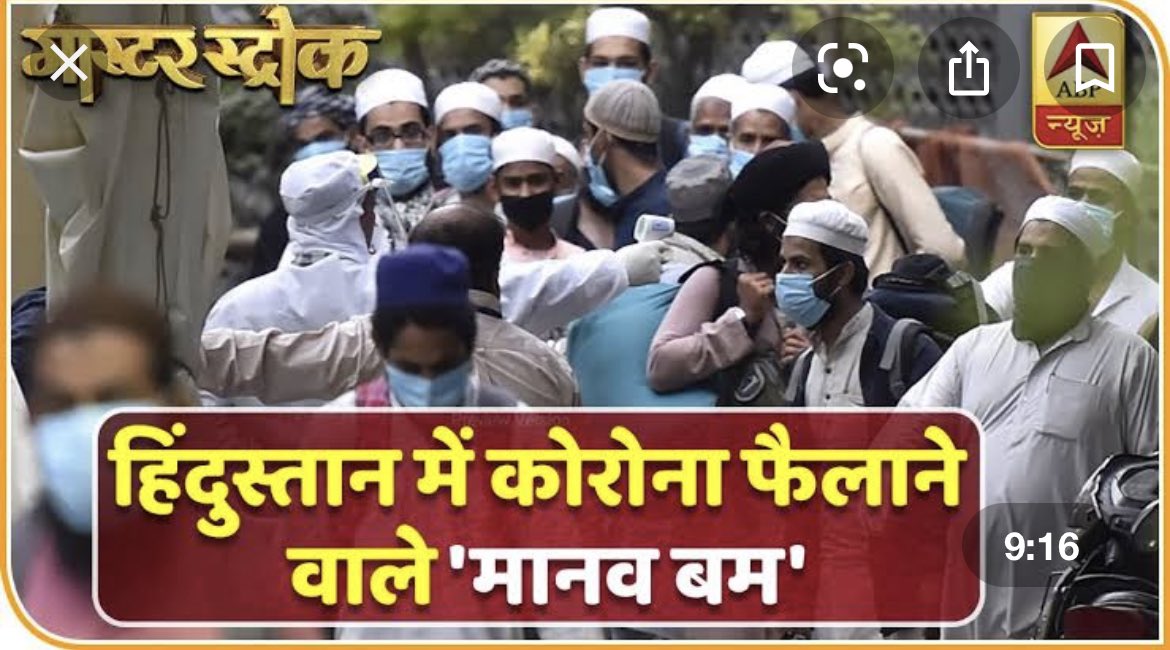 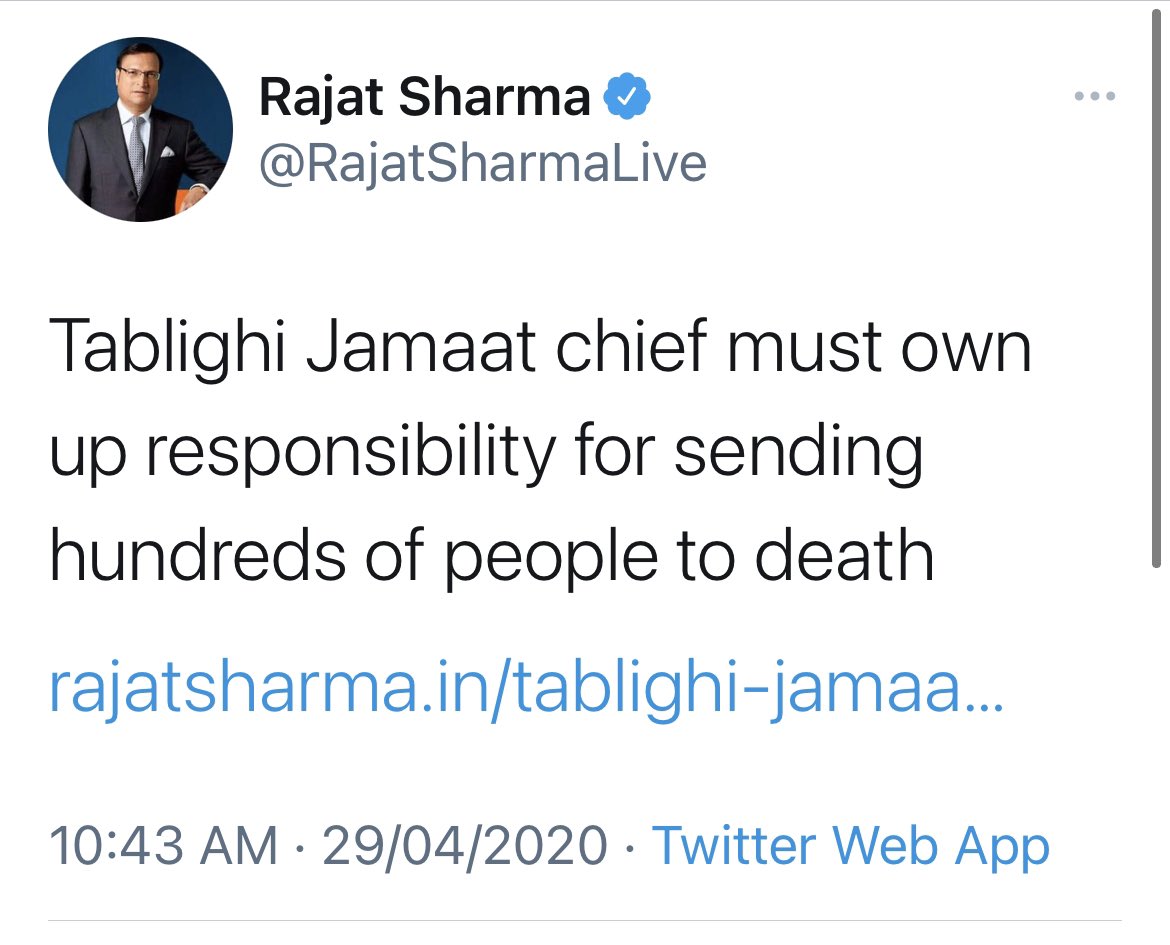 We were here in Feb. And here is what happened next. Is there going to be no accountability for this? 22/22