1) COVID AND TRANSFERRIN: UNITING IRON OVERLOAD, COAGULOPATHY, AGING, SENESCENCE, AND SHORTENED TELOMERES A paper from May 2021 out of Wuhan noted that a previous study in Austria found that ferritin and transferrin were both associated with the risk for ICU admission in COVID-19 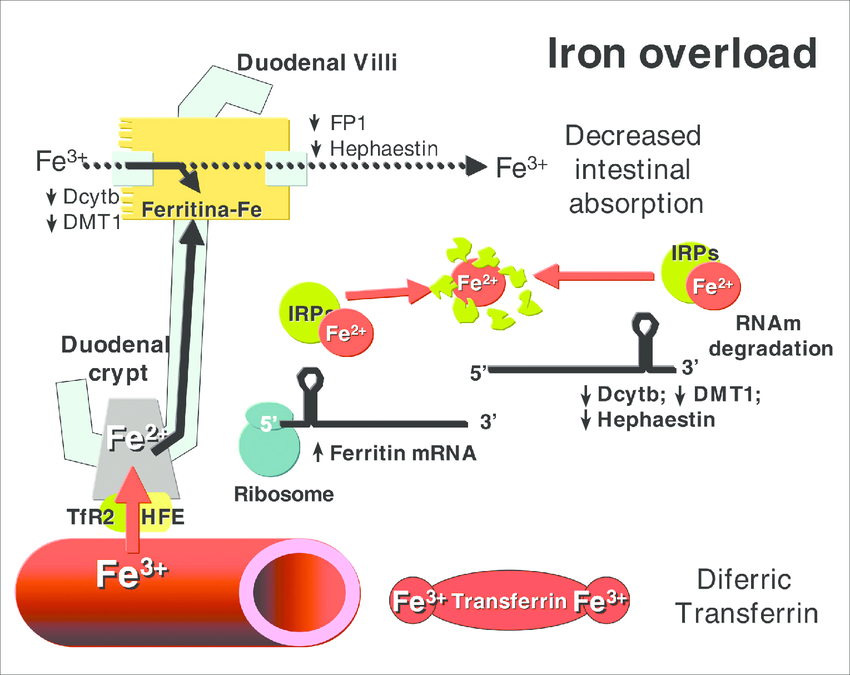 2) patients, and no significant relations were found in iron and other indices. This study indicated the relation between iron metabolism and the undesirable outcome of COVID-19, whereas the association with specific comorbidities warrants further investigation. In our study, we

3) found high serum iron level was associated with disease severity in COVID-19 patients. Transferrin is a protein that binds iron and transports it throughout the body. It is the main iron carrier in the blood. Transferrin levels normally increase with iron deficiency. When iron

4) is low, your body will try to compensate by making more transferrin to increase the availability of iron. However, SARS-CoV-2 makes cells think that iron availability is low when it is actually overabundant. It “tricks” the cell into releasing more iron into the bloodstream

5) for availability. Transferrin is primarily produced in the liver. However, (SARS-CoV-2-induced) locally produced transferrin may contribute to COVID-19 pathology, even independent of circulating transferrin levels. This means that a blood test may show normal levels of

6) transferrin, yet “where COVID needs it,” it makes its own. BYOT! A proteomics analysis of infected cells revealed a SARS-CoV-2 related upregulation of transferrin that is elevated in males and increases with age. What else does transferrin do, besides cart iron around? It’s a

7) procoagulant! he expression of transferrin, a known procoagulant, was upregulated in SARS-CoV-2-infected cells, increased with age, and was higher in males than in females (stated earlier). Moreover, a rise of transferrin levels was observed in patients during COVID-19 disease

8) progression. Transferrin is an iron carrier protein that circulates and delivers iron to cells via transferrin receptor binding followed by receptor-mediated endocytosis. However, it also promotes coagulation by iron-independent mechanisms as an inhibitor of antithrombin,

9) which interferes with the prothrombotic activity of coagulation proteases such as thrombin and factor XIIa. In a study from 2017, the majority of participants were of European descent, and regardless of genetic predisposition, individuals with the phenotype of Fe overload,

10) which was defined as elevated concentrations of serum ferritin (>300 ng/ml for men and >200 ng/ml for women) or transferrin saturation (TSAT) (≥50 % for men and ≥45 % for women), showed an approximately 2-fold higher OR of having shorter LTL than those without the

11) Fe-overload phenotype. In addition, elevated expression of transferrin heavy chain and transferrin receptor were detected in COPD SAEC compared to NS, correlating with alterations in senescence markers p21 and Sirtuin-1/-6 (n=6). If Lady Macbeth was SARS-CoV-2, she would