A short 🧵 about the value of rapid tests. As long time followers will know, a runny nose is not very informative for me because I have allergies, and they have been playing up recently. I had three -ve PCR tests, but a worsening of symptoms over the weekend had me anxious... 1/?

even worse, I was visiting (vaccinated) friends and hanging out indoors and unmasked. You might think that epidemiologists are safer than most to hang with, and I could think of no known exposures, but I couldn't escape the (irrational) sense that fate has a sense of irony 2/?

After all, the prevalence is not super high here but I have been riding city buses, going to work etc and while it's not like I've been attending illegal raves (those days are past) I have been venturing indoors. So my persistently runny nose had me a bit 😬 3/?

Fortunately my hosts had a bunch of rapid antigen tests. to hand. Moments later I am in the clear (bands get clearer over time and so you should continue to check test results for a while). The example shown is Abbot's BInaxNOW but others are available 4/? 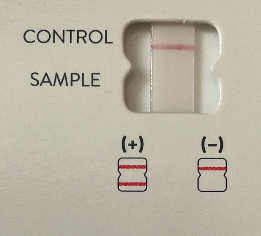 In the UK rapid tests have been readily available and free. I've heard of people handing them out at the beach. My old friend @kinasebiology woke up last week with cold symptoms. Instead of taking the crowded train to work, he did a rapid test and caught his breakthrough case 5/?

The test band (T) lights up more when there is more virus present - ie when viral load is highest. Barely detectable Thursday mornings a week apart. A very different story over the weekend (when symptoms were worst) 6/?

By doing this, @kinasebiology stopped a whole bunch of people being exposed. And has managed to control his own contribution to transmission. That's the public health benefit. On top of that, a negative test can help people relax if they have symptoms (tho should get PCR too) 7/?

Since then I've had a -ve PCR 👍 and my daughter has developed symptoms and been -ve on both rapid antigen test and PCR. It's useful information to have. There's a load of literature and material from @michaelmina_lab on the topic. And we should be making better use of them 8/?

They won't halt the virus on their own. But they would give us actionable information, improving situational awareness and helping prevent introductions to vulnerable places (like nursing homes). It's never too late to do things better. So let's 9/end