A “razor” is a rule of thumb that simplifies decision making. The most powerful razors I’ve found:

The Luck Razor When choosing between two paths, choose the path that has a larger luck surface area. Your actions put you in a position where luck is more likely to strike. It’s hard to get lucky watching TV at home—it’s easy to get lucky when you’re engaging and learning.

The Arena Razor When faced with two paths, choose the path that puts you in the arena. It's easy to throw rocks from the sidelines. It's scary and lonely in the arena—but it's where growth happens. Once you're in the arena, never take advice from people on the sidelines.

The Gratitude Razor When in doubt, choose to show MORE gratitude to the people who have mentored or supported you. Say thank you more. Tell someone you appreciate them. Not just on special occasions—every single day. Lean into gratitude daily and your life will improve.

New Project Razor When deciding whether to take on a new project: First, ask yourself if it's a "hell yes!" opportunity. If not, say no. If it is, imagine that it's going to take 2x as long and be 1/2 as profitable as you expect. If you still want to do it, say yes.

The Uphill Decision Razor When faced with two options, choose the one that’s more difficult in the short-term. @naval calls this making "uphill decisions”—a forced override of your pain avoidance instinct. It's worth it—short-term pain creates compounding long-term gain.

The Invested vs. Spent Test Time is either *invested* or *spent*. Invested time—actions that compound: • Reading • Physical activity • Mindfulness • Relationship building Spent time—actions that don’t. When choosing what to do, prioritize investing time, not spending it.

The Rooms Razor If you have a choice between entering two rooms, choose the room where you're more likely to be the dumbest one in the room. Once you're in the room, talk less and listen more. Bad for your ego—great for your growth.

Occam's Razor When you're weighing alternative explanations for something, the one with the fewest necessary assumptions should be chosen. Put simply, the simplest explanation is often the best one. Simple Assumptions > Complex Assumptions. Simple is beautiful.

Listen Mode If you encounter someone with opinions or perspectives very different from your own, listen twice as much as you speak. Our natural tendency when we hear a view we disagree with is to respond and refute it. Default to Listen Mode. You'll learn way more that way.

The Lion Razor If you have the choice, always choose to sprint and then rest. Most people are not wired to work 9-5—long periods of steady, monotonous work. If your goal is to do inspired, creative work, you have to work like a lion. Sprint when inspired. Rest. Repeat.

The Duck Test If it looks like a duck, swims like a duck, and quacks like a duck, it’s probably a duck. You can determine a lot about a person by observing their habitual actions and characteristics. When someone tells you who they are, believe them the first time.

Hanlon's Razor Never attribute to malice that which can be adequately explained by stupidity. In assessing someone's actions, we shouldn't assume negative intent if there's a viable alternative explanation—different beliefs, lack of intelligence, incompetence, or ignorance.

Hitchens’ Razor Anything asserted without evidence can be dismissed without evidence. Newton’s Flaming Laser Sword If something cannot be settled by reasonable experiment or observation, it's not worth debating. *These will save you from wasting time on pointless arguments!*

The Opinion Razor "I never allow myself to have an opinion on anything that I don’t know the other side’s argument better than they do." - Charlie Munger Opinions are earned—not owed. If you can't state state the opposition's argument clearly, you haven't earned an opinion.

The Writing Knife Block If you're struggling to understand something, try writing it out. When you write, you expose the gaps that exist in your logic and thinking. Study to fill the gaps. Writing is the ultimate tool to sharpen thinking--use it as a "knife block" for life.

The Braggers Razor Truly successful people rarely feel the need to brag about their success. If someone regularly brags about their wealth or success, it's fair to assume the reality is likely a small fraction of what they claim.

The Reading Razor When deciding what to read, just read whatever grabs you. When it stops grabbing you, put it down. Avoid the trap of only reading “impressive" books that bore you to death. Never establish reading vanity metrics as goals.

The Stress-Reward Test Too many people take on stress that has no upside. If something is going to be stressful, consider whether the reward is sufficiently outsized to justify the stress. If it isn't, don't take it on.

Those are 20+ razors that will simplify decision-making. Follow me @SahilBloom for more writing on growth, decision making, and more. I will write a deep dive on this topic in my newsletter. Join 105,000+ others who will get it!

@SahilBloom The human razor: There is no need to assume complex or nefarious motives when fundamental interpersonal/personality differences are sufficient to describe them. If an opinion or disagreement can be explained by uninfluenced personality conflict, no ulterior motive is necessary.

Beautiful visualization of these razors by @SachinRamje. Nicely captured in a single printable page! 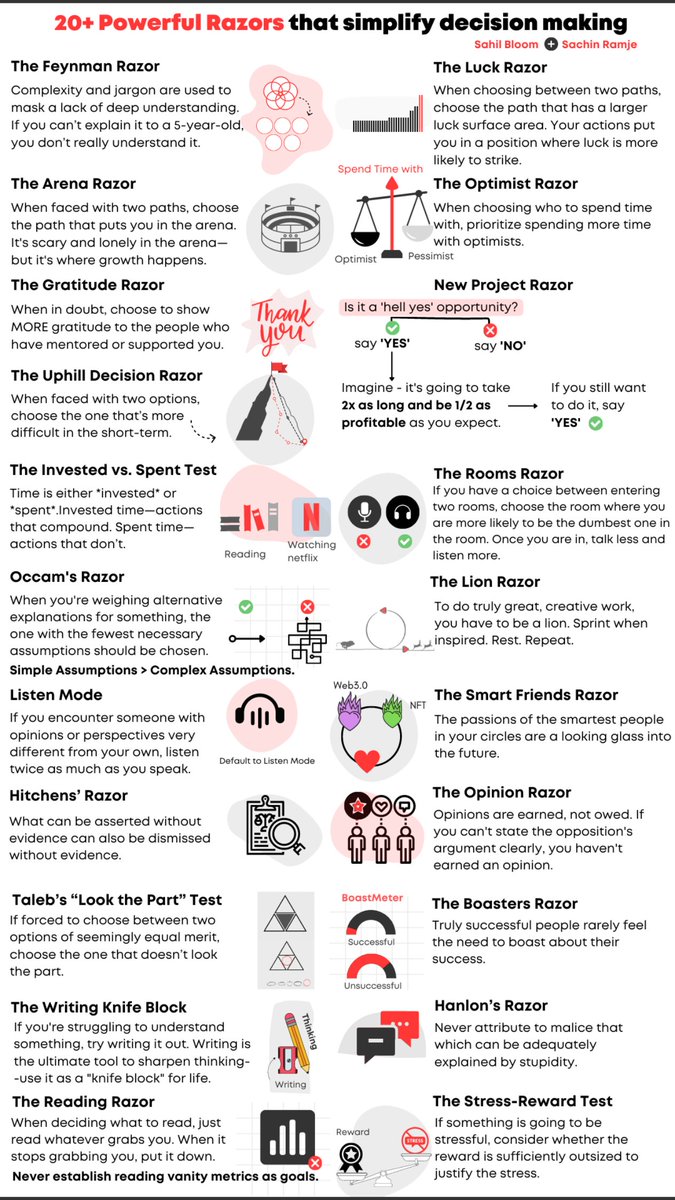 @SahilBloom Nice. Btw nowadays I want to read anything on my eBook reader. Webpages are easy to be pushed there. These tweets are not. Anyone building any tool to ease this pain? Anyone else having the same problem?